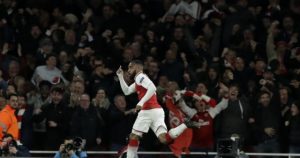 Antoine Griezmann scored late for 10-man Atletico Madrid to draw at Arsenal 1-1 in the first leg of their Europa League semifinal on Thursday.

After Sime Vrsaljko was sent off in the 10th minute, Atletico defended resolutely and, with the away goal, has to be considered the favorite to progress to the final next month in the French city of Lyon. The second leg is in the Spanish capital next Thursday.

With what was Atleticoa��s sole chance in the second half, Griezmann pounced on a long punt badly mishandled by Arsenal defender Laurent Koscielny. Through on goal, Griezmann went past goalkeeper David Ospina to score in the 82nd minute.

The equalizer was against the run of play, and cancelled out Alexandre Lacazettea��s 61st-minute opener. Following some neat interplay in and around the Atletico penalty area, Jack Wilshere looped a cross to the far post which was steered in by a leaping Lacazette.

The goal was a just reward for sustained pressure by Arsenal from the first whistle.

Lacazette missed two good opportunities, clipping the outside of the post in the sixth minute, and heading straight at Atletico goalkeeper Jan Oblak a minute later.

Atleticoa��s game plan had to be revised when Vrsaljko, who had been booked for an early challenge on Wilshere, picked up a second yellow for a late tackle on Lacazette.

An already-animated Diego Simeone was incensed by the decision and, three minutes later, the Atletico manager was sent to the stands for remonstrating vehemently against the decision of French referee Clement Turpin not to caution Arsenala��s Hector Bellerin for a foul. Simeone was then seen to mouth profanities.

With the man advantage, Arsenal dominated possession and had several clear-cut chances in the first half. Danny Welbeck was particularly wasteful when through on goal. And yet, Atletico probably went closest to scoring but Griezmanna��s 37th-minute shot from inside the area was parried away by Ospina, who was picked ahead of usual first choice Petr Cech (AP).

Messi Extends Contract With Barcelona Till 2021