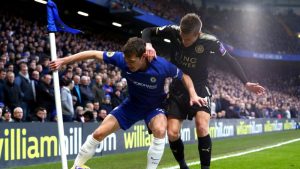 The visitors ended the match on the back foot after Ben Chilwell received a second yellow for a bad foul on  Victor Moses  on 68 minutes that possibly merited a straight red.

But Leicester should have been in front by then after dominating a first half in which they mustered 12 goal attempts.

Anotnio  Conte ‘s side missed the chance to go above second-place  Manchester United , and could now be overtaken by  Liverpool  if they beat  Manchester City  on Sunday. TALKING POINT

Leicester look like their old selves. It’s difficult to know what to expect from Leicester, after the highs of two seasons ago and the lows of their last campaign, but this was reminiscent of the former. They dominated Chelsea in every department, looking especially dangerous on the break, and it took the red card for Chelsea to get a foothold in the game. Even then Leicester limited them to few clear chances and this match was another clear sign that  Claude Puel  has the Foxes on the right track.

Mount Panorama: ‘I expect him to win’