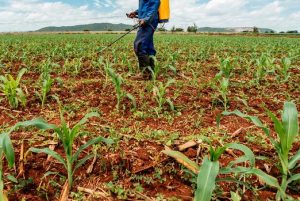 No fewer than 12 million farmers have pledged to contribute N100 each to support President Muhammadu Buhari’s return bid  in 2019 elections.

The farmers are those who benefited from the Central Bank of Nigeria’s Anchor Borrowers’ Programme.

They are insisting that the current agricultural revolution taking place at the grassroot across Nigeria must continue.

According to THISDAY sources, the pledge would amount to a whooping N1.2billion and would be put together by the farmers under the auspices of Anchor Borrowers Farmers’ Association, whose membership runs across the country, particularly the North-west and the North-east.

Saying one good turn deserves another, one of the leaders of the farmers, who spoke on condition of anonymity, said they were happy with the president for his credit initiatives that had boosted their trade.

“Baba Buhari has been so good to us. So we think contributing N100 each will not be too much a way to appreciate him,” he said.

The Central Bank of Nigeria (CBN) had in line with its developmental function established the Anchor Borrowers’ Programme (ABP) and was launched by the president on November 17, 2015.

The programme is intended to create a linkage between anchor companies, involved in the processing, and small holder farmers (SHFs) of required key agricultural commodities.

The programme thrust of the ABP is provision of farm inputs in kind and cash (for farm labour) to small holder farmers to boost production of these commodities, stabilize inputs supply to agro processors and address the country’s negative balance of payments on food.

At harvest, the SHF supplies his/her produce to the Agro-processor (Anchor) who pays the cash equivalent to the farmer’s account.

As at August 2018, about N150 billion had been disbursed to farmers under the programme.

The farmers’ gesture would be the second of such by interest groups since Buhari declared his intention for a presidential rerun.

The first was in September 2018 when a group, National Consolidation Ambassadors Network (NCAN), put together N45 million to purchase the All Progressives Congress’ presidential expression of interest and nomination forms for him.

Lg Polls: Crippling Gang For A Stronger Apc In Kano