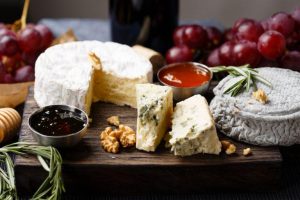 1. Dairy
Sorry, cheese and ice cream lovers, but dairy can cause a variety of issues related to inflammation. As mindbodygreen notes , dairy is one of the most inflammatory foods we eat.

It’s the proteins and sugar in dairy that are really to blame for its bad rap. If you’re lactose intolerant, then consuming this sugar found in milk is sure to give you problems. Even if lactose isn’t your issue, many people respond poorly to casein and whey, two proteins found in dairy products. And we haven’t even mentioned the growth hormones and antibiotics used on cows for milk production, but these can also cause inflammation. 2. Refined grains

There’s a reason your doctor has told you to stick with whole grains when possible. Healthline explains white breads, pastas, and rice have all the nutrients and fibrous parts removed. This means refined grains have very little fiber, vitamins, or minerals. And because of that lack of fiber, they’re digested much quicker than their whole-wheat counterparts. This causes rapid blood sugar spikes during mealtime, which ultimately can lead to chronic inflammation and a wealth of diseases, like diabetes. 3. Diet foods with artificial sweeteners

Not everything approved by the FDA is good for you. | iStock.com/BigRedCurlyGuy

Just because it’s approved by the FDA doesn’t necessarily mean you should be eating it. Artificial sweeteners are in all your favorite diet products, but some evidence suggests you might be better off consuming actual sugar. The Arthritis Foundation says if you already have an autoimmune condition, then it may have an impact on your health. Even if you’re just sensitive to artificial sweeteners, eating them may trigger an inflammatory response if your body doesn’t think they belong. 4. Fried foods

You know by now that eating anything deep fried isn’t doing your waistline any favors, but it’s also deeply hurting the inside of your body, too. Fried foods contain loads of saturated fat, which the journal Advances in Nutrition notes can lead to an inflammatory response. And Mother Nature Network says frying foods creates a neurotoxin chemical that also causes issues. Do yourself a favor and bake your foods instead of allowing them to hit that hot oil. 5. Processed meats

Go for a veggie sandwich next time. | Rez-art/iStock/Getty Image

We know bacon is a favorite food for many, and you probably haven’t considered how your daily ham sandwich is affecting your health, but both of these meats are highly inflammatory. In fact, any meat that’s been processed and packaged should be avoided like the plague.

NHS Choices notes researchers believe nitrites, the preservatives in these meats, are what triggers an inflammatory response. And there was even a study performed on 1,000 adults, about half of whom had asthma, to see how a diet rich in processed meats affected their condition. The study found eating these products four times a week worsened symptoms. 6. Alcohol

Sorry a�� we know you’ve heard that your glass of red wine at dinner is helping your heart, but this may not really be the case. While an alcoholic beverage here and there isn’t such a big deal, going out drinking on a consistent basis can cause a serious inflammatory response and increase your risk of developing disease. An article from the World Journal of Gastroenterology explains chronic alcohol consumption impairs how well your gut and livers works, thus leading to inflammation and organ damage.

You probably know this by now, but your sweet tooth may be increasing your risk of developing heart disease, cancer, diabetes, and even arthritis. Healthline notes the types of sugar you’re most likely eating too much of are table sugar, known as sucrose, and high-fructose corn syrup.

One study found those who consumed soft drinks sweetened with sucrose were producing higher levels of uric acid in their body, which drives inflammation. And another study suggests sugar intake has a strong connection with the development of breast cancer due to its inflammatory properties. 8. Movie theater popcorn

That small bag of movie theater popcorn may seem innocent, but it’s actually full of saturated and trans fats that can cause a huge inflammatory response. The New York Times notes most theaters pop their corn in hydrogenated coconut oil, and that a�?buttera�? you can add on top is just more partially-hydrogenated oil.

When you hear the word a�?hydrogenateda�? beware that this means there are trans fats lurking in your food. And trans fats are a disaster for your body, as they cause a significant amount of systematic inflammation. 9. Artificial coloring

You probably didn’t know artificial food dyes can make you sick, but it’s certainly something to keep in mind. As one study says , artificial dyes are made from petroleum, and they’re cheaper and last longer than dyes made naturally. The problem here is these dyes can bind with body proteins and create inflammation. This can then lead to the development of autoimmune disorders or even behavioral problems. 10. Vegetable oil

Omega-3 fatty acids have been making waves in the health world for their benefits. On the other side of the coin, omega-6s are a major cause of inflammation. Shape notes vegetable oils like soy, sunflower, corn, cottonseed, and safflower are all rich sources of omega-6 fatty acids. If you’re not eating enough omega-3-rich foods like fish, flaxseeds, or walnuts to offset your omega-6 consumption, you could have some serious inflammatory problems. Opt for extra virgin olive oil when you can. 11. Seasoning mixes

Your spice cabinet seems innocent, but Shape says your seasonings can actually trigger an inflammatory response. So, what’s the deal with your spices? Many of the mixes are incredibly high in sodium (we’re looking at you, taco seasoning). And a high sodium to potassium ratio in your diet can trigger inflammation and put your heart at risk . Aim to use fresh or dried herbs without the salt overdose whenever possible. 12. Seitan

Go for tofu when you have the chance. | iStock.com
Vegans and vegetarians everywhere have probably told you about the wonders of seitan. While it can mimic the taste and texture of meat, it’s also made entirely from gluten. Many people can eat gluten-heavy foods without noticing any ill effects. But for those with celiac disease or a gluten intolerance, seitan can cause a serious inflammatory response, Care2 explains . You might be better off going with tofu if you’re looking for a meat substitute. 13. Peanuts

There’s a surprising way peanuts can cause inflammation. | iStock.com/sergoua

We’re hoping by now you know not to be deceived by the name of the peanut, as it’s not a nut at all. It’s a legume rich in protein that make it a healthful snacking option for many to reach for. While those with an allergy certainly can’t eat peanuts, there’s another issue that can cause inflammation a�� naturally occurring fungi found on the legume. Dr. Becky Campbell tells mindbodygreen that in her experience, exposure to this mold has contributed to higher levels of inflammation. 14. Steak

Research continually shows different data concerning the health effects of eating red meat. While we know too much of anything is never good, the Independent explains a new study suggests eating unprocessed red meat in large quantities increases the risk of developing an inflammatory bowel condition. The evidence wasn’t conclusive, as those used in the sample also tended to smoke more, eat little fiber, and exercise less. But even so, you’ll want to at least eat grass-fed beef over grain-fed to make sure you’re not causing an inflammatory response in your digestive system. Here’s what you can do to reduce inflammation

Aside from avoiding these foods, you can make lifestyle changes to see some anti-inflammatory benefits. Nutritionist Kellyann Petrucci tells mindbodygreen you should stay away from antibiotics, antacids, and certain over-the-counter pain relievers. These can be disruptive to your gut, which can trigger inflammation through your whole body.

You should also, of course, get your body moving regularly, sleep for at least seven hours a night, and get plenty of sunlight for much-needed vitamin D.

Wike Says Igp After His Life, Accuses Idris Of Ordering Raid Of His Residence