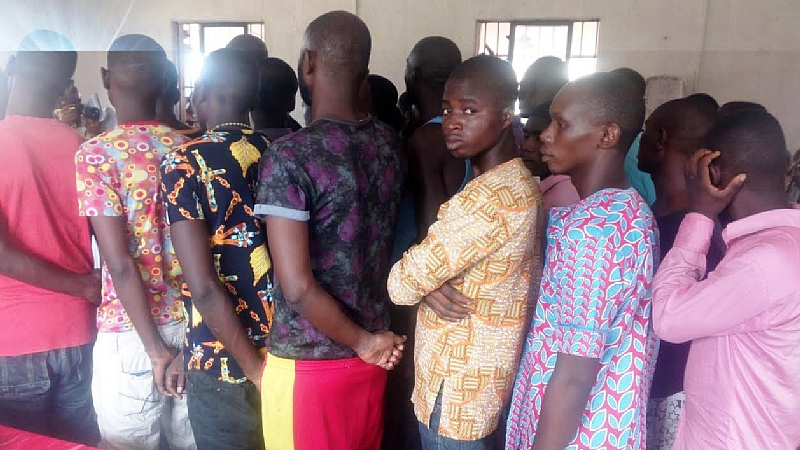 The joy of inmates at the Warri Medium Prison knows no bound as the Chief Judge of Delta State, Justice Marshal Umukoro released a total number of 65 inmates in conclusion of his 2017 quarterly Prison visit to Prisons.

Those released include a nursing mother of a two months old baby who was standing trial for grievous harm and several others who regained freedom Tuesday to reunite with their families for the Christmas celebration.

The Chief Judge ordered their released amidst jubilation on the grounds of ill health, lack of diligent Prosecutions by the Police, offence committed not known to law and no case to answer based on the legal advice from the Attorney-General of the State through the Director of Public Prosecutions.

Other criteria used by the CJ to free the inmates from captivity was on the ground of the validity of the remand warrants whether it was issued by a court of competent jurisdiction, the period the inmate has spent in custody awaiting trial and other exceptional circumstances.

Justice Umukoro, who said he reviewed 3036 remand warrants and released a total of of 150 inmates from the Agbor, Ogwashi-Uku, Kwale, Sapele and Warri Prisons in an exercise that started on November 14, 2017, disclosed that the visitation was in pursuant to the provision of the Criminal Justice (Release from Custody (Special Provision) Act Cap, Volume 4, Laws of the Federation of Nigeria, 2004 and in order to exemplify the passionate desire of the Chief Judge to decongest the Prisons.

While lamenting the High number of youths wasting away in prison custody, the CJ observed that most inmates find their way into Prisons because they refused to live within the confines of law and morality.

He said a majority of age bracket of inmates in custody fall within 17 and 27 years which according to Justice Umukoro, shows a gross dysfunction in “our family system in the country”, adding that many of them were from poor background but was quick to say that poverty should not be an excuse to go into crime.

Amongst those released on bail was a pregnant woman while a man remanded in prison custody for over eight months for stealing a bottle of Benlyin cough syrup worth N1200 was ordered to be set free by the Chief Judge.

The Chief Judge while commending the Director of Public Prosecutions, Mr Ernest Edomwonyi and his team for his contributions towards the success of the exercise, called for the reorganization of some Zonal Offices of the Ministry for more effective service delivery.

23 thoughts on “150 Inmates Regain Freedom From Prison In Delta”