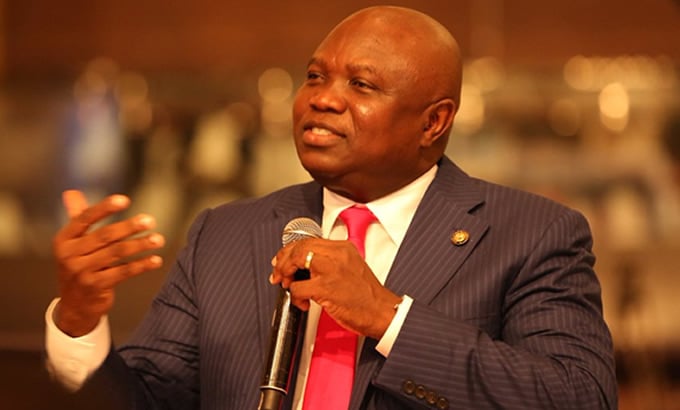 There can’t be a better time to know the atrocities Nigerian politicians have committed against the people than when they quarrel. Hidden skeletons are excavated. Accusations and counter-accusations fly in all directions. Of course, all of these don’t happen because they love the masses. Far from it. It is all about interest. But, is that not what the struggle for power all about?

Nothing succinctly captures the philosophy and how the mind of the average Nigerian politician works better than the drama playing out in Lagos – the commercial capital of Nigeria. The seat of power in Alausa will be up grabs in a matter of months. Expectedly, alignments and realignments have begun. Horse trading, betrayals,intrigues and all the elements that make the game of politics interesting are not missing.

Until recently, a great number of Nigerians had believed Gov. Ambode of Lagos would have a smooth second term journey. To them, his huge investment in infrastructure is enough to recommend him for a second term.Whether the cost attached to various projects across the state is an evidence of prudence in public spending by the government is another matter entirely ,especially when the debt of the state dwarfs those of other states. But that’s by the way.

Ambode is fighting the fiercest battle of his political career. His godfather, Asiwaju Bola Tinubu, has refused to endorse him for a second term. He is not also in the good books of his party men who have shown him his ‘successor’ , even before the governorship election. He is also believed to be unpopular among Lagos civil servants.

The Lagos number one man will not go down without a fight.H e started what many have tagged a “season film”, leaving ears to itching for more . On September 30, Ambode announced to the world that his godfather’s candidate ,Mr Jide Sanwo-Olu, was once arrested and detained in the US for spending fake dollars, adding that he once went for rehabilitation in a hospital in Lagos!

Hear him, “ The aspirant that has been put up to contest against us is not a fit and proper person to take this job. This particular aspirant is somebody that has been arrested for spending fake dollars in a night club in America, and was detained for months. It is also known that he doesn’t have the competence to do what he is propelled to do. This is somebody that has gone for rehabilitation before. The records are there at Gbagada General hospital.’’

However, like a prodigal son that has retraced his steps, an interesting twist to the whole drama happened on October 3- exactly three days after his press conference that cast aspersion on the integrity of Sanwo-Olu- when Ambode congratulated his major challenger at the APC governorship primary ,pledged his support for him and urged his party members to work for his victory. Now, Ambode cut the picture of a lonely man in the wilderness whose cry for help petered out because no one was listening .And I ask, what were the initial braggadocio and chest-thumping all about?Where will the Lagos governor summon the strength and courage to convince Lagosians that the one he labelled a fake dollar spender who had also allegedly been a guest at the Gbagada General Hospital for rehabllitation, according to him, is now fit for the office of the governor?

Ambode’s travail has once again brought to the fore the discourse about godfathers and the influence they wield. From Kwara to Zamfara, Zamfara to Lagos, the lackeys of strongmen in the politics of the aforementioned states govern. What the Sarakis are to Kwarans is what the Tinubus are to Lagosians. In Lagos, for instance, ever since Senator Tinubu’s second term expired as governor of Lagos, no one has governed the state without his endorsement. Ambition remains in the realm of ambition if the Lion of Bourdillon does not bless it.

Similarly, in Kwara , the Sarakis have the final say on who governs the state since our return to civil rule in 1999.While I concede that godfathers are powerful, it must also be stated that they derive their power from the people. Ordinary Nigerians make them, but they will continue to expand their political fiefdom as long as the people permit.

Back to Lagos, though pleas were made to Tinubu to endorse Ambode for a second term, conceding that only one man can decide who should govern a state , in my view, amounts to deification of a godfather. Yes, Tinubu has the party structure in his pocket. It is also his right to pitch his tent with any aspirant of his choice,but the people also have the final say on who governs them. And, regardless of the influence a godfather wields, his candidate is beatable. At least, the charade in Osun is an eloquent testament.

As things stand, our energies should be chanelled to a vigorous campaign to have a free and fair election devoid of violence, ballot snatching and stuffing and partisan conduct of security agents such that the Ambodes of this world would not need to kowtow to godfathers if performance can get them re-elected without hassles. When Nigerians are ready, they will take back power and their destinies from godfathers and their lackeys.

THE MONSTERS THAT OPPOSE RESTRUCTURING AND THE BEASTS THAT THREATEN WAR