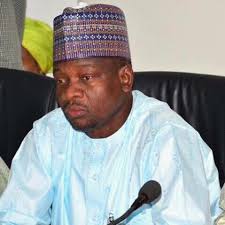 He however said that he was ever ready to support whoever that will emerge as gubernatorial candidate of the APC ruling party in the state.

Dalori stated this weekend in Maiduguri while reacting to the recent leadership crisis in the party where the much talk ed ‘Tenure Elongation’ of the Executives from ward, Local, state and National level to continue in office till 2019 was put to rest last week in Abuja by President Buhari, reversing his earlier pronouncement that the tenure of the party executives was elongated.

The Chairman also added weight to the decision or position of President Buhari for the party to hold its congress at the Wards, LGAs, states and the National convention in line with section 223 (1) of the 1999 constitution as amended and section 17 (1) of the APC Constitution.

Dalori said he was willing to answer any clarion call from his people to vie for any position or governorship race on the party’s platform if given the mandate.

His words: “I am glad to inform you that the much talked about tenure elongation of our party executives have been put to rest. This is because if we continued with the extension of our tenure, it will amount to breach of law within the party, hence an illegality against the constitution of our great party.

” If Borno people and our Leader,Governor Kashim Shettima said I should contest in the governorship primaries on the platform of our great party, who am I to say no, but let the time come as I am ever ready to support anyone who emerges as Gubernatorial Candidate of our party in the forthcoming general elections”. Dalori said.

With this latest development it is now in record that the list of The Borno state gubernatorial list has risen to five with Hon. Adamu Lawan Fan Jumba, serving State Commissioner of Works and Transport, Hon. Mai Modu Sheriff Galadima, junior brother to former Governor Ali Modu Sheriff and former State Commissioner of Water Resources under the administration of of Governor Kashim Shettima,.

Others include the Former Chief of Staff COS to Governor Kashim Shettima and serving Senator, Borno North Senatorial district, Hon. Abu Kyari, and Hon. Kaka Shehu Lawan, serving State Commissioner of Justice and State Attorney General SAG who have been in the waiting list carrying out underground campaigns and mobilising their supporters at the grassroots tactically before their resignations to officially declare their intentions.

He however, commended the developmental strides recorded under the administration of Governor Kashim Shettima, in the past seven years of his leadership, particularly in the areas of youths and women empowerment, poverty alleviation to youths and women, especially IDPs, agriculture, roads and drainage networks, education and managing the Boko Haram crisis among others,.

Dalori further insists that whoever emerges as the elected Candidate of the party, he would be support him or her and mobilize supporters for hum or her.

Although this was coming on the heels of the internal crisis rocking the APC ruling party where majority of the members and supporters of the party including some of the executives members of the APC ruling party in the state are in loggerhead with the state chairman and have been nursing grudges over the leadership style of the incumbent State Chairman of the APC where on several occasions, they protested for his replacement but to no avail because he is a classmate and a friend of Governor Kashim Shettima.

However, with the recent declaration of Governor Kashim Shettima not to contest any elective position come 2019, it seems anybody contesting for the governorship election in Borno state come 2019 is on his or her own as he vowed never to use government funds to sponsor anybody but retire to the class as senior lecturer or farming.