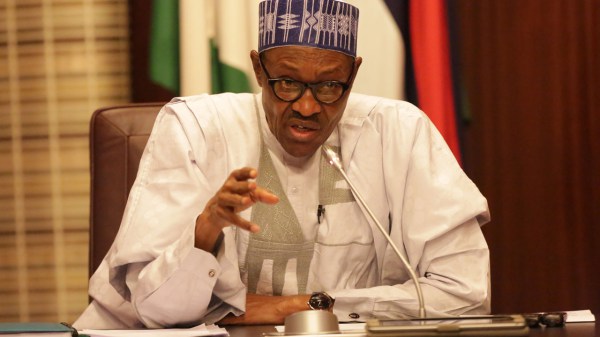 a�?We have endorsed Buharia��s re-election because the policies and template of development already laid down by him in the last three years are already yielding fruit and needed to be actualized in his next four years in officea�?, His Royal Majesty, Eze Dr. Oliver Ohanwe, from a communiquA� he read on behalf of Southeast traditional ruler at Okigwe, Imo state.

a�?Anybody who wishes this country good, who wishes this country well, will want Mr. President to continue after 2019. So, we wish he will continue by the grace of Goda��a��, the Emir of Maradun in Zamfara, Alhaji Garba Tambari, expressing the feelings of some traditional rulers across the country who have resolved to ensure the re-election of President Buhari in the 2019 presidential election.

What quantum of power do the traditional rulers possess in Nigerian politics? To refresh our memories, the fact of the last presidential elections in 2015 showed that the current President Muhammadu Buhari won elections in 24 states of the federation. As events to the 2019 general polls gather momentum, there are projections that he may win more states: the 12 core northern states, four in the Southeast, two or more in the South-South, five in the Southwest and four in the north central zone.

I can stand bold to predict the total victory of the President come 2019 from three substantial sources: the traditional institution, the religious groups especially the Church and overwhelmingly from the plebiscite. I will take the support from the church and the commoners later. But from the custodians of our ethics and culture, I would like to begin in the Southwest of Nigeria which evidently has proven to have the overbearing shadow and strength as a�?Jagaban of Nigerian politics todaya�?; the determinant factor and the fulcrum of political pendulum in the nation. Bola Ahmad Tinubu alone is a colossal factor but it is often said that one tree does not make a forest. Yet, I can confidently assure that with the full support of the first class obas of the decisive region in the Nigerian politics, the 2019 Presidential elections will be won by the performing leader.

The leaders from the Southwest have been openly showing their support to Mr. President and making pronouncements that delineate their passion for the continuity of the Buhari-Osinbajo administration beyond 2019. Many of them have used key ceremonies in their domains to canvass the support, others have granted interviews to newsmen on it. As at today, no zone of the federation has the collective traditional support Mr. President enjoys like in the Southwest, save the Northwest. Others, if they believe in integrity and nation-building, should therefore, follow suit.

The Oba of Lagos, Rilwanu Akiolu, has the belief that the present administration is committed to the task of nation building and ensuring that Nigerians receives the reward of good governance. While receiving the Lagos branch of the Nigeria Union of Journalists (NUJ) in his palace, he cautioned Nigerians not to blame the administration for the current crisis facing the nation, which he said was caused by every Nigerian. a�?President Muhammadu Buhari has the aspirations and feelings of Nigerians at heart, all he wants is the contribution and collaboration of every Nigerian,a�? he said. In another event while meeting behind closed doors with the vice president Yemi Osinbajo at the Aso Rock, the Oba assured of support for the continuity of the government.

The Arole Oduduwa and Ooni of Ife, Adeyeye Enitan Ogunwusi Ojaja II, described Buhari as an extraordinary globally known selfless and incorruptible servant to Nigeria who deserve support for continuity. In a statement by his director of media and publicity, Comrade Moses Olafare, the Ooni exclaimed: a�?His very clean record speaks for him for he has from 1961 till date meritoriously served this country in various capacities.a�? He believes Buhari remains a leader driven by uncommon discipline, a nationalist whose relentless, dedication and incorruptible service to Nigeria are unequalled.

On the part of the Alaafin of Oyo, Oba Lamidi Olayiwola Adeyemi III, Buhara��s uprightness, conscience and integrity has always placed him ahead of other leaders. The Oba observed that he did not support ex-President Goodluck Jonathana��s re-election because of his confidence in Buharia��s ability and trustworthiness. According to him, people who are used to free money will never like Buhari, no matter whatever convincing evidences. a�?If I loved money, I would have supported former President Jonathan. Spending was never his problem. Conscience is the reason why I will always support PMBa�?, he explained. The Oba cautioned first class traditional rulers in the country against making inflammatory statements that could fuel acrimony and disunity amongst Nigerians.

In a statement he issued, the Alaafin said that as the longest-serving first class traditional ruler on throne so far, he had acquired experience more than any other traditional ruler across the country in relation to traditional rulership and political development of the country, thus his belief that equity demands support to the government to move forward.

In addition, the Alake of Egbaland, Oba Adedotun Gbadebo, enlists Nigerians to support Buharia��s re-election bid. The monarch said Buhari deserved it so as to consolidate on the laudable policies and programmes which he had initiated. a�?I am part of the campaign team soliciting that Buhari should be given another chance to lead for another four years to complete the great work he has started.a�? Those who drafted the constitution, according to the Oba, to allow for a second term have envisaged that while a leader formulates policies and programmes, more time is required for maturity and translation of that to the peoplesa�� benefits. Nigeriaa��s problem, he insisted, is lack of continuity in policy implementation.

In his own way, Oba Adeyeye Ogunwusi has stressed that Buhari is the best option for 2019 despite the criticism by the opposition. Also, the Emir of Ilorin, Dr. Ibrahim Sulu Gambari has said that traditional rulers will always rally support for president Buhari. While receiving the Minister of Information and Culture, Alhaji Lai Mohammed, the monarch said that the traditional rulers trusted Buhari. Speaking on behalf of majority of traditional rulers of this country, he expressed readiness to support Buhari anytime. a�?We trust the president, we know him to be a man of discipline.a�?

Besides, the Emir of Maradun, Alhaji Garba Tambari, amongst many others who have spoken from the northern part of Nigeria, stands firm that some traditional rulers across the country will ensure the Presidenta��s reelection in 2019. The Emir wants all Nigerian citizens who love Nigeria to support the re-election bid to ensure continuity in the success journey.

In the same vein while speaking to journalists in Abuja, the president, Association of Royal Traditional Rulers of Nigeria, Eze Thomas Obiwuru Obiefule viewed the Nigerian project as efforts to transform the country by President Buhari. He said the association was founded by over 300 traditional rulers from all parts of Nigeria and called on Nigerians to pray and support the federal government for development and prosperity. Also Igwe Dennis Ezebuilo, the Ogbodudu second of Amanuke Kingdom, Awka North local government area of Anambra, expressed the need to support Buhari to develop Nigeria.

The Southeast traditional leaders have joined the league of supporters for Buharia��s reelection. The declaration made by over 200 ezes through a communiquA� at Okigwe local government area in Imo state was distinct. The monarchs want Buhari for his selfless service, drive for peace, unity and progress of Nigeria, added to the fact that corruption under his watch has reduced by over 75 per cent. They said he has justified the 2015 mandate and has restored the dignity of Nigeria. The communiquA� read by HRM, Eze Oliver Ohanwe, however, urged the President to support an Igbo President of Nigeria after completing his second tenure in 2023.

On a general note, the Association of Traditional Rulers of Nigeria is behind Buhari. For instance, in a communiquA� jointly signed at the end of its 103rdconference in Abuja by the national chairman, the Okairuro Umudioka Ancient Kingdom of Imo state, Eze Thomas Obiwuru Obiefule and the National Secretary, Dalhatu Katsina of Jigawa state, Alhaji Abubakar Lawal, the custodians of tradition and culture expressed support for Buhari. I will attempt next to look at the support the President enjoys from the Church.

A VOICE FROM THE GRAVE

A Case Of Betrayal?

9 thoughts on “2019: Buhari and the traditional leaders”