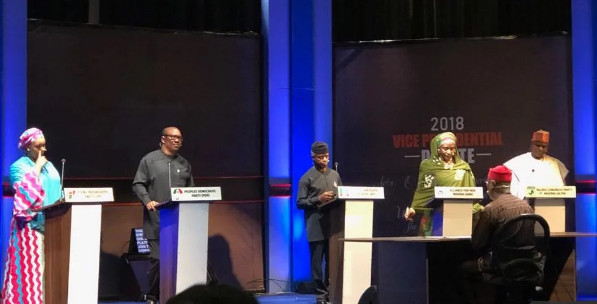 The campaign for the 2019 election has finally taken a centre stage with the occasion of the vice-presidential debate, but the outcome leaves much to be desired. Instead of addressing the real problems and the practical solutions, the debate turned out an extraordinary display of tawdry campaign tactics and innuendos. The candidates appeared woefully bereft of new ideas, easily resorting to a mundane mélange of banal excuses and cliché promises, false claims and fancy analysis, imaginary problems and, of course, pointless solutions.

Rather, the Nigeria’s main problem is squarely the lack of efficient implementation of policies. Of course, contingents of eminent scholars have pondered on the Nigerian problems and converged on numerous occasions in the form of constitutional, economic, and political conferences, leading to profound policies capable of uplifting the country to greatness. Today, there is an abundance of progressive policies stacked in every ministry, agency or commission. Unfortunately, however, the policies are either totally abandoned, poorly implemented or fully funded only to be looted by the politicians in cahoot with their cohorts in the private sector.

It goes without saying that most of the issues commonly echoed as Nigerian problems, such as corruption, epileptic electric supply, falling education standards, poor healthcare, bad roads, fuel subsidy, etc. are mere symptoms—not the true problems. Corruption, for instance, is the most recurring decimal of Nigerian leadership woes. Successive governments followed by formulating many aggressive policies that can obliterate corruption, but any manner of seriousness typically ends at the adoption stage. For example, it is well studied that illegal campaign money is the root cause of corruption in Nigeria; yet, none of the agencies entrusted with enforcement of the electoral laws has bothered to implement the critical anti-corruption policies embedded in both the Constitution and the Electoral Act.

The 2019 election is not shaping to be any different from the past in terms of fighting corruption by curtailing illegal campaign money. The signs are manifest in Nigeria’s off-year elections which typically serve as a preview of the general elections. Despite ample evidence of massive bribery and tainted money in the Anambra, Ekiti, and Osun governorship elections, there are literally no consequences for flouting the laws. The two major presidential candidates in 2019 elections, President Muhammadu Buhari of APC and Former Vice-President Atiku Abubakar of the PDP have only made matters worse. The duo began the electoral season by allowing sham support groups to purchase their nomination forms for the 2019 elections—all in clear violation of the electoral laws. Atiku did not stop there. The PDP presidential candidate secured the nomination by flooding the convention venue with a heavy rain of tainted dollars. Now, with less than 60 days to the presidential elections, there is a deafening silence on how these two major candidates have been funding their campaigns. So, how can Nigeria be taken serious on the war against corruption if the most potent anti-corruption policy is totally ignored?

This question prompts me to a jejune exchange between Yemi Osinbajo and Peter Obi during the vice-presidential debate where they were attempting to illustrate the pattern of the war against corruption with a tale of criminals and commodity shop. While it provided needed excitement to exert energy debating whether it is better to allow criminals to empty a shop inventory or locking shop and chasing the criminals; commonsense dictates that it is better to annihilate the criminals at their well-known den so that they do not have the opportunity of reaching the store in the first place. An honest implementation of Nigeria’s campaign finance laws is like smashing corruption at its den.

Besides corruption and campaign finance, there is a slew of sound policies in other areas that would have helped to elevate Nigeria to an enviable pedestal, if such policies were properly implemented. For instance, Nigeria has from time immemorial recognized that steel development is indispensable for national industrialization and thence devised a comprehensive Steel policy, which dates back to 1971 under Yakubu Gowon’s military regime. It was popularized as Ajaokuta Steel Mill under Shagari democratic government and has remained hyped through the current Buhari democratic administration. The Operation Feed the Nation and Green Revolution, the agricultural policies of Obasanjo’s military regime (1976-1979) and Shagari’s Green Revolution (1979-1983) were master plans that could have fed the entire Africa. Similarly, the Power Roadmap of Jonathan’s regime is a dynamic policy capable of meeting our electricity needs. Further, as Vice-President Osinbajo noted in the debate, the Fuel Subsidy policy has good merits and similar to other kinds of subsidies obtainable in both developing and developed economies. Most of the Nigerian infrastructure are byproduct of good policies, designed with international standards, including ageless money spinners, such as Lagos-Ibadan Expressway, Lagos-Benin Expressway, 2ndNiger Bridge, Mambilla Power Plant, etc. It is not surprising, therefore, that despite the billions of dollars sunk into the various projects at different times, the outcome has been nothing but a mystery.

Nigeria’s leadership dilemma appears insoluble because the problem is being approached from the periphery. Instead of attacking the main problem, successive governments have focused on the mere symptoms. It is like attempting to cure brain tumor with a headache pill. Even if the World Bank empties its vault in Nigeria, it amounts to naught, if the well-studied policies formulated to utilize such funds to solve the country’s problems are poorly implemented or totally abandoned. Therefore, any serious debate on 2019 election ought to emphasize on the elusive “how”—how to provoke the efficient implementation of policies. Anything less is the same old song—busy doing something very close to nothing.

The Mark Of The Beast

Community Policing: A Panacea For Combating Crime  In Nigeria.

9 thoughts on “2019 Debate: Nigeria Does Not Know Its Problem”