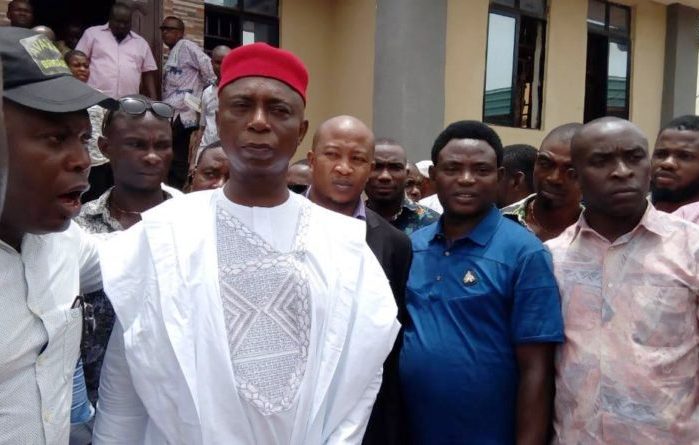 Ahead of the 2019 general elections in Delta State, one of the prominent Delta North Senatorial aspirants, Prince Ned Nwoko, has consulted with the Peoplesa�� Democratic People (PDP), Aniocha North local government council.

Addressing party executive and members on Wednesday April 4, 2018, Prince Nwoko, pointed out that gone are the days when the Anioma Nation was underrepresented, stressing that the time has come for the Anioma Nation to get it right by choosing quality leadership to represent them at the Senate.

While affirming that after consultations with his family and political associates and widely accepted by the people, he is the right man for the job of making laws for his people.

The widely studied international lawyer and business guru assured that he would reestablish the Anioma dignity in politics if voted in as a senator in 2019, adding that the caliber and personality of the senator who represents the zone at the senate matters a lot.

Prince Ned who also spoke to a massive crowd of youths outside the secretariat after the consultation, advised them to brace up to the task ahead, positing that it is the turn of Aniocha to produce the next senator to represent Delta North Senatorial District.

Hear him: a�?The office of the Senator requires a personality who is distinguished and not one that continually brings shame and reproach to a people. We have been seriously shortchanged and we cannot continue to allow it. We need quality representation and because Anioma people are dignified and respected people, we must watch who we send to Abuja to represent us.

a�?Let me further tell you that as far as this contest is concerned, I have no rival by the grace of God. I know I am eminently qualified and positioned to emerge victorious by your support, endorsement and active role in the processa�?, Nwoko stresseda�?.

Speaking at the event, Aniocha North PDP chairman, Prince Victor Egbune, stressed that what Prince Ned Nwoko has come to do was official consultation with the PDP in the local government, where he is a bona-fide and active member; after which he would do an intent declaration later in the year based on Independent National Electoral Commission (INEC) timetable.

a�?But I must emphasize that Ned Nwoko is our son here at the home front. While we will not discriminate, we must ensure that a level playing field is provided for all to advance their political aspirations,a�? Egbune said.

The PDP secretariat in Issele-Uku was a carnival of sort, as party elders, women and youths trooped out in their number to show solidarity to a man known as the Star Prince of Anioma, Prince Ned Nwoko.