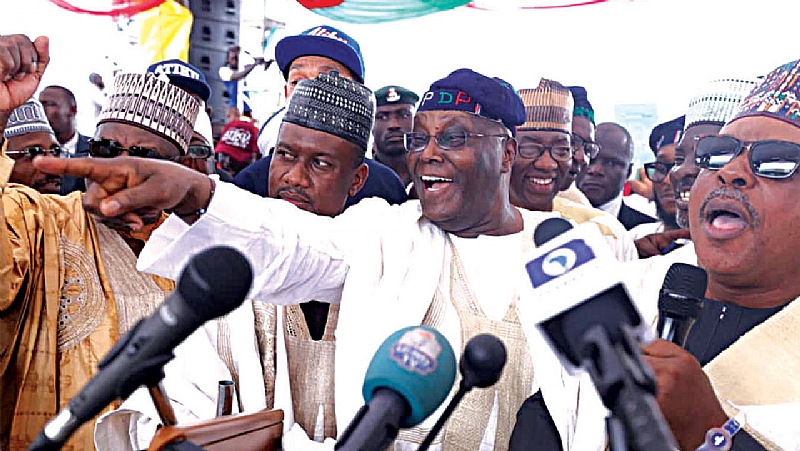 Ahead of February 16th Presidential elections, women groups from various ethnic and tribal groups in the country living in Ebonyi state have distanced themselves from the re- election bid of President Muhammadu Buhari of the All Progressives Congress(APC) and declared total support for the former Vice President, Atiku Abubakar.

The women said the APC government has failed to live up to the minimum expectations of Nigerians in infrastructure, security and job creation.

The women made their position known on Monday at Friends of Atiku Campaign Office in Abakaliki when they paid a solidarity visit to the state coordinator of the group, Hon.Linus Abaa Okorie.

Speaking on behalf of others, the leader of Benue state women in Ebonyi state, Mrs. Ujoh Rose , condemned what she described as 'disheartening treatment being meted to women under the current APC government, saying the time has come to end the ugly development.

Mrs. Ujoh who retired as Assistant Director of Administration at the Federal Teaching Hospital Abakaliki, said ” if you take time to study how politicians handle women and youths during campaigns and after elections it is very disheartening. Because they only value us during elections only to discard us after victory.

“Since I retired from service no benefits, no entitlements,nothing at all. Each time I call the man in charge , he will say I am in a meeting. What kind of meeting is that that holds everyday and which does not end? It is time to change that , and it is our believe that Atiku Abubakar will be very different when he come on board on May 29th.

“As leaders of women groups from various tribes and ethnic groups in Nigeria, we shall galvanize our fellow women in this state to ensure the victory of Atiku Abubabar come February 16th.

In her remarks Mrs. Hajia Adiza Abubakar leader of Hausa Women In Ebonyi from Adamawa state said chilling reports of Killings and sundry insecurities across the country demand urgent attention, stressing that Atiku Abubakar was the only presidential candidate with the experience and political will to tackle the challenges.

” All these killings , hunger and unemployment everywhere in Nigeria should be addressed and i know that my brother Atiku will stop it when he become President.

In his reaction, the state Coordinator of Friends of Atiku in the state and member representing Ohaozara/Onicha/Ivo federal constituency, Linus Abaa Okorie, commended the women for their visit and assured them that Nigeria will be great and prosperous under Atiku Abubakar and Mr.Peter Obi.

Okorie directed the coordinator of the women wing of Friends of Atiku in the state, Mrs. Eze Mercy, who is also the Women Coordinator, PDP Presidential Campaign, Ebonyi State; to work closely with the women to ensure the victory of the Peoples Democratic Party(PDP) Presidential candidate in the next month's presidential polls in the state.

Delta Speaker congratulates Efe, says it is a victory for Okpe kingdom

US Plane Crash In Texas Kills All On Board