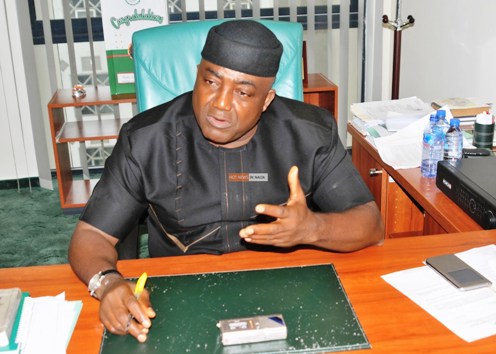 Minority Leader and member representing Isoko Federal Constituency in the lower chambers of the National Assembly (NASS), House of Representatives, Hon Leo Ogor has stated that he has not endorsed any candidate to replace him in the forthcoming general election.

In a statement signed by his Press Secretary, Mr Akpodhoma Mikoko, and made available to The Nigerian Voice, Ogor described the news making the round as mere rumour and figment of the writers' imagination. According to him, he would notify his supporters adequately, should there be any act of such being contemplated by him.

The statement read, “The attention of the Media Office of the Minority Leader and member representing Isoko Federal Constituency, Hon. Leo Ogor has been drawn to a devilish rumour that our principal has purportedly endorsed certain candidates including Prince Johnson Erijo, the incumbent lawmaker representing Isoko South Constituency II at the Delta State House of Assembly for the Office of the Isoko Federal constituency ahead of the 2019 general elections”.

“The rumour is unfounded, has no iota of truth, rather it is a demonic and calculated attempt by some enemies of Isoko Federal Constituency to cause unnecessary panic and uproar in a bid to heat up the polity across Isoko nation and to strain the age long cordial relationship between the two lawmakers, aimed at seeking unmerited attentions to force our peaceful constituents into a state of confusion and panic”. Ogor appealed to all and sundry not to lose sleep over such a rumour even as he sued for their continued support. “We want to use this medium to call on our teeming supporters, lovers of the Peoples’ Democratic Party, (PDP), and the general public to discountenance such rumour being milled by unknown sources and enemies of the Peoples’ Democratic Party (PDP) in Isoko nation”, The statement read.