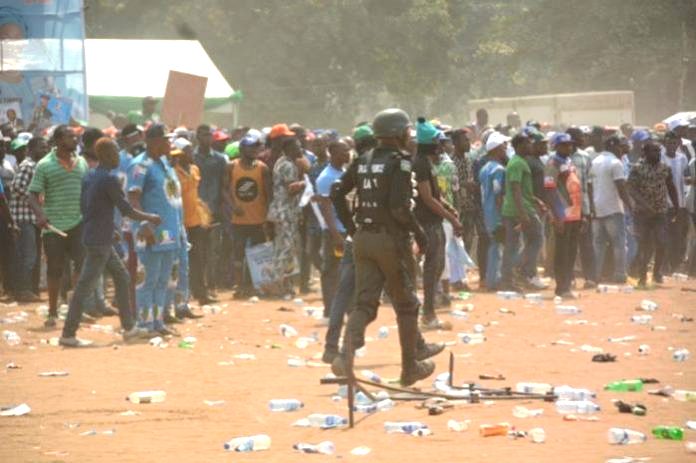 As a democrat and advocate of peace, law and order which is a sine qua non for human cohabitation and engagement, one is greatly disturbed and condemns in strong terms, the reported violence which broke out during the 2019 Lagos state APC gubernatorial election campaign rally flag off in Lagos, Nigeria yesterday 8th January, 2019.

More saddening and traumatizing is the reported loss of lives and injuries to others which resulted from the mayhem provoked alledgedly by the infighting between two factions of the National Union of Road Transport Workers (NURTW), Lagos state chapter.

While, one commiserates with the victims of this assault on our human dignity and right to life, we wait and keenly watch how the Nigeria police force, Lagos state command will deal with this infractions of the law, even though, the command has come out through a press statement to lay the blame on a faction of the Lagos NURTW and declared the leader of that group wanted.

However, it is important to situate the flag off rally and it's impact on society in proper context, in view of the season we are in, with the electioneering campaign fever going to spread round the 36 states of the federation and the federal capital territory Abuja, for close to two months from now.

That violence by rival groups broke out with the use of guns, knife and other dangerous weapons against one another and on innocent Nigerians with the chief security officer and number 1 citizen of the state in person of Governor Akinwunmi Ambode, Deputy Governor Idiat Adebule, other dignitaries and thousands of Nigerians in attendance, is humiliating, despicable, an assault on our collective sensibilities and a violation of the law of the land.

Most regrettably and unfortunate was the agony and inconvenience that innocent motorists and commuters were subjected to within the Ikeja axis and it's environ for most of the day through traffic gridlock which locked down most major roads and the attendant economic loss and dislocation, health strain, etc, calls for concern about the crowd control and traffic management system in our environment in this political season.

Also, on approaching the campaign rally venue, one observed the absence of adequate and effective security mechanism to promptly respond to threats to life and property and realizing this lacuna, must have emboldened the initiators of the violence to exhibit their acts of criminality in broad day light.

In view of the above observations, one is forced to ask that in organizing this political campaign rally, was the Nigeria police authorities, Lagos state command properly notified or not?

If the answer to the above is in the negative, then the party, All Progressive Congress (APC) is culpable of engaging in acts of undermining the security of life and property of Lagosians as well as subjecting them to untold hardship and agony through traffic logjam in the conduct of it's party business as recognized by the constitution.

But in the alternative, if the Nigeria police force, Lagos state command was duly notified and yet failed to provide adequate security to guarantee the safety of life and property at the rally venue, as well as put in place measures to ensure that other Nigerians are not inconvenienced like happened yesterday due to traffic lockdown, then the Lagos state command of the Nigeria police force has exhibited gross act of irresponsibility and abdication of its constitutional functions which is condemnable.

If what we witnessed yesterday is anything to go by, then we should expect more of it from future political rallies if Nigeria police force, Lagos state command is not woken up from its slumber of abdication of its constitutional responsibility which resulted in the inconvenience of Lagosians due to traffic gridlock, assault on our fundamental rights and violation of our law by hoodlums and miscreants, which must not be allowed to repeat itself in whatever form.

That the Nigeria police force, Lagos state command is focusing on the violence at the rally venue only and has not deemed it fit to apologize to Lagosians for the harrowing traffic gridlock is an exhibition of its insensitivity, irresponsibility and out of touch with modern realities of policing.

The responsibility of the police all over the world is to secure life and property at all times and not to abdicate it during electioneering campaign like we witnessed yesterday in Lagos state and it is important for it to apologize and ensure that measures are put in place to avert a repeat of these kind of incidences not only in Lagos state, but across the federation because of the political season that we are in.

One hereby calls on the Inspector General of Police (IGP) to immediately read out the riot act to state commissioners of Police on the security and traffic threats during this electioneering season which needs to be addressed with utmost professionalism and diligence.

I Visited Obasanjo And Learnt How To Play Ayo!

The Rise and Rise of Chimamanda Adichie