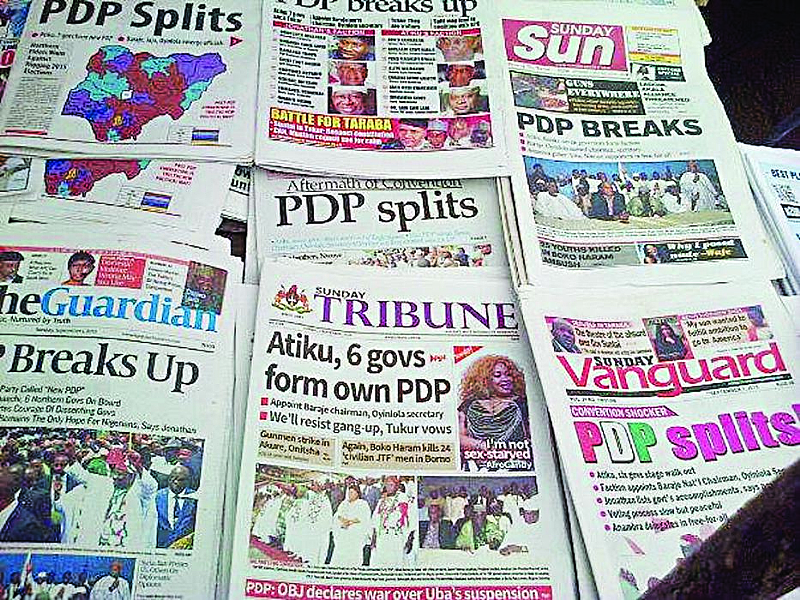 Every society in the words of George Soros needs some shared values to hold it together. When such values disappear, the society becomes a mere simple equation without meaning.

In the same breath, the Nigerian political space at independence despite being an amalgam of multicultural, multi-religious and multilingual groups thrived peacefully on some values nourished by a healthy media sector built on professionalism.

This harmonious existence, however, has since transcended to a chaotic coexistence; a development occasioned by the ‘’leaders’’ search for new but personal fields to increase their wealth and wellbeing -with the media also opting out of its primary mandate of objective reportage to become a willing tool in the hands of these political gladiators.

As a consequence, pervades our nation with the politics of fear and bankruptcy of ideology, eroded opportunities for sound policy formulation, left Nigerians as both victims and witnesses to tears with our democracy down-graded and troubled.

Globally, the role of the media in every evolving democratic society like ours is to among other functions inculcate and reinforce positive political, cultural, social attitudes among the citizenries. Create a mood in which people become keen to acquire, skills and disciplines of developed nations.

And when the media fails to perform these roles, the nation can never hope to raise the standards of living of the people or achieve the political development of the state.

Curiously, media practice in Nigeria has seen power lately gone the wrong way but assumed it’s the right thing- watched the nation’s political gladiators redefine democracy in the image of their actions but viewed it normal.

And very oddly, the practitioners no longer see themselves as problem solvers or watchdogs of the society but now occupy a high ground they do not understand while leaving the masses that initially depended on them confused.

For instance, the failure of the media to study the various propositions presented by the leaders in the past, and their failure to inform the masses accordingly has resulted in situations where politicians persuaded Nigerians to endorse and applaud policies that were harmful to their interest.

This and other sordid performances emanating from the industry explains why the nation is currently groping and stumbling, politically divided and confused. Indeed, the media is part of the problem.

In the face of these failures, one point the operators often forget as the watchdog of the society is that the ‘function of the media is very high. It is almost holy. It ought to serve as a forum for the people, for it is through the media that the people may know freely what is going on. And to misstate or suppress the news is a breach of trust’.

To further underscore the importance of the media players in shaping the society, it is widely believed that the viability of democracy depends upon openness, reliability, appropriateness, responsiveness, and a two-way nature of the communication environment. That democracy depends upon the regular sending and the receiving of objective signals.

But with the practice ‘adulterated’ with the vast majority of Nigerians depending on the social media which currently dictates the pace, the answer as to why the signal from the media feed is growing cynicism among the masses and accelerating the decline of democracy on our shores becomes glaring.

Without minding what others may say, key observations has revealed that while some of the practitioners are busy adjusting the ‘’ goal post’’ to accommodate their vested interest, Nigerians with discerning minds like their counterparts the world over still maintain the rock-solid conviction that ‘a free press is not a priviledge but an organic necessity in a society. That without criticism, reliable, and intelligent reporting, the government cannot govern because without a viable media practice, there is no adequate way in which it can keep itself informed about what the people of the country are thinking or doing.

No doubt, ‘every decision a journalist makes when gathering, organizing and presenting the news requires a value judgment. Different decisions bring different results. All decisions have consequences that are direct and indirect, intended and unintended, short term and long term. And journalist’s decisions affect others; those decisions may influence thousands of people’s opinions on a political issue’.

With what is currently going on our political turf coupled with the media practitioner’s inability to break away from dependence on some personalities, not even the ongoing amendment of the Nigerian Press Council Act can salvage the media industry.

The truth is that majority of the practitioners have lost the philosophy to challenge the nation’s economic logic and capacity to pursue the theory of government in order to effectively inform the general public.

Lamentably like an unchained torrent of water submerged the whole countryside and devastate crops, so has subjective reportage and inability to employ creative imaginations has affected our socioeconomic development and stunted the nation politically.

However, as the nation races towards 2019 general election, the media players must organize their strength into a compelling force built on credibility that both the government and the masses can trust while keeping in mind that the sole aim of journalism is service and its through providing this service, that the practitioners enjoy great power and followership.

As an incentive, this time in the writer’s opinion is auspicious for the media players to remember that ‘a man who creates power makes an indispensible contribution to the nation’s greatness. But the man who questions power makes a contribution just as indispensible, especially when the questioning is disinterested; for it is in this that we determine whether we use power or if power is using us’.

It is, therefore, the writer’s views that media practitioners create professional characters embodied with virtues that people can respect, develop moral and ethical principles that the masses can applaud and trust– develop genuine independence from partisan political personalities so as to discharge their responsibilities with unshakeable confidence.

These are little beginnings that will assist in building the nation of our dreams.

COUP: The Two Cabal Who Govern Nigeria And The Call To All Men To Rise Up!

The Inhumanity of Royal Dutch Shell in Ogoniland