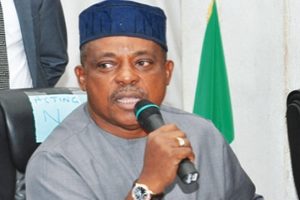 The PDP however did not give detailed account into the meeting which it claimed held at the State House on Friday.

While calling on President Buhari not to “allow his personal ambition to push the nation into chaos,” the opposition party equally cautioned INEC Chairman Prof. Mahmood Yakubu “not to succumb to pressure to manipulate the electoral process for President Buhari as such could cause serious crisis capable of disarticulating our nation.”

Speaking in a statement by its National Publicity Secretary, Kola Ologbondiyan, the opposition party said the Nigerian political space was already tensed and shouldn't be worsened by the electoral body.

“The party warns that President Buhari's handlers, who are desperate to force him on an unwilling nation, are fast pushing the nation to the brinks and should be checked before it is too late” said Ologbondiyan.

“PDP's fresh caution to INEC Chairman is predicated on an alleged secret meeting he held with President Buhari's Chief of Staff, Mallam Abba Kyari, at the Presidential villa last Friday.

“Prof. Yakubu should note that the polity is already tensed over INEC's listing of President Buhari for election despite his failure to present the constitutionally required academic credentials like other candidates. This development casts a dark shadow on the credibility of INEC to conduct a transparent election.

An open letter to the Anambra electorate