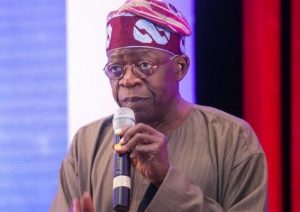 For the main opposition party, it is disappointing for  Tinubu to resort to indecorous statements which ill-fits his stature as a senior citizen.

The party’s position was made known  Tuesday in a statement  by its director, media and publicity, Kola Ologbodiyan.

The PDP said Tinubu ought to be found in the class of respected senior citizens who are decorous and speak statesman-ly.

According to the statement,  “The PPCO wants, Tinubu, as the Asuwaju of Yoruba land, to know that he has the responsibility of tutoring the younger generation on the culture of the Yorubas, which holds that when a child is given the errand of a slave, he delivers it like a freeborn.

“At Tinubu’s stature, he ought to be found in the class of respected senior citizens who are decorous, speak statesman-ly and not resorting to the gutters whenever he speaks in public. “In politics, family ties and bonds as well as relationships are greater and stronger than political interests and it is the expectation of our campaign organization that Tinubu should understand this.”

The PDP said Atiku is a focused Nigerian who has contributed immensly to the economic and political development of our nation. He has also displayed huge stability in character through the bridges of human and economic relationships he has built across our nation. “At this critical time, when majority of Nigerians expect true democrats, which Tinubu has always claimed allegiance, to come together and rescue our nation from the absurdity of a governance that the APC and the Buhari presidency represent, it is unfortunate that Asiwaju chose being tied to the aprons of anti-democratic interests.

“It is therefore strange, if not ridiculous, that the Asiwaju of Yorubaland can be dancing around an anti-people government at this time. “Our advice to Tinubu is that he should be watchful ahead of his 2023 wishful presidency interests because those he is dining with today, has demonstrated in time past, that they can always use and dump him,” the PDP stated.

Tinubu recently said President Buhari’s trustworthiness is what distinguishes him as the candidate to beat in the 2019 presidential elections. The respected APC leader argued that the character of the two presidential candidate front-runners, Buhari and Atiku Abubakar, could not be more distinct.

249 thoughts on “2019: PDP replies Tinubu over offensive comment on Atiku”