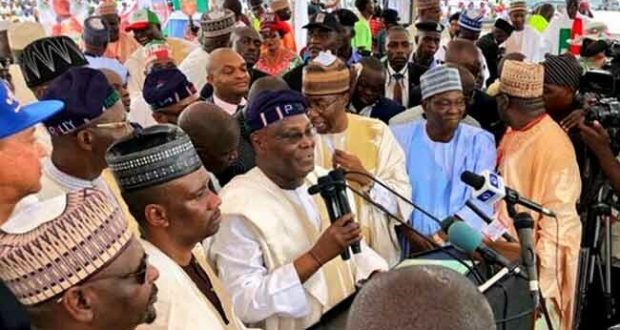 According to a statement by Atiku’s media office, leaders of the Peoples Democratic Party (PDP) from all the geopolitical zones of the country and the National Working Committee of the PDP, led by its National Chairman, Prince Uche Secondus, attended the PDP mega rally.

While making his declaration to contest the presidency, Atiku said the ruling government of the All Progressives Congress had performed below par on managing the economy, keeping the country united and stemming the trend of wanton loss of lives in the country.

Atiku said, “Fellow Nigerians, the government of APC has failed, it has failed to unite Nigerians. Today, we are more divided than at any other time in the history of this country.

“The APC government has destroyed our economy. They took over an economy with a growth of seven per cent and brought it down to less than two per cent. Today, we are witnessing the most insecure situation in Nigeria ever since APC took over.

“Today, we have the highest unemployment rate in this country. More than 10 million of our people have been made unemployed under the watch of the APC administration.”

The former vice president stated that more Nigerians had died under the APC than in Iraq and Afghanistan, adding that the Nigerian economy continued to flounder.

He said he was poised to work with other compatriots in the PDP to secure the party’s nomination for next year’s election with a mission to rebuild the economy and reunite the country.

“What the PDP is going to do is restore our economy, restore hope of a greater Nigeria and ensure that we have security of lives and property.

“I therefore appeal to all of you, wherever you may be, that it is time to now re-embrace the party that has given us unity, prosperity and security in this country,” he added.

Secondus said the party would crush the APC in the 2019 elections.

Secondus said, “We believe God has finished with the APC, and the PDP is coming like a moving train that will crush the APC government. The leaders of the APC are corrupt. They are in the valley of corruption. They could not allocate revenue to states in the last two months. The government has collapsed; the economy has collapsed, and security has collapsed. Everything has collapsed.

“We are on a rescue mission. And so, I charge the people of Adamawa and the North-East to brace themselves for the elections of 2019. We are not afraid; we are strong. We are coming like a moving train and the APC will be crushed in the name of the Lord almighty. We believe that God has finished with the APC.

“What they are doing now is to frame Nigerians and leaders of their own party. Only this morning, we learnt that the Reformed APC, the authentic APC headed by Buba Galadima that has life, is being threatened by the APC.”

Secondus also received several members who defected from the APC and other political parties to the PDP. Among them were three commissioners, three state legislators and a female legislator of the Social Democratic Party in the Adamawa State House of Assembly and some chairmen of local governments from the APC.

The rally was attended by PDP stalwarts, including Abubakar Mustapha, Obi Nwodo, Adamu Mu’azu, and the Deputy Governor of Gombe State, Charles Iliya.

According to Governor Ibrahim Dankwambo of Gombe, who was represented by his deputy, the country will be safe in the hands of the PDP.