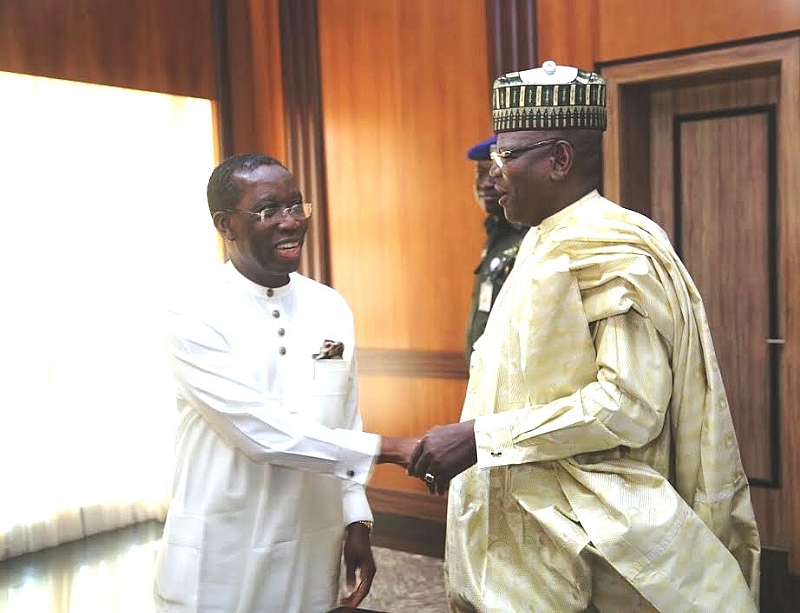 As consultation for 2019 Elections begins, Delta State Governor, Senator Dr. Ifeanyi Okowa has urged members of the Peoplesa�� Democratic Party (PDP), to remain focused and committed to ensure victory for the party.

Okowa gave the charge when Thursday the former governor of Jigawa State, Alhaji Sule Lamido and his team visited him in Government House, Asaba.

Governor Okowa said that PDP needed to remain united and committed and carry all its leaders and members along so as to achieve victory in future elections.

a�?I am happy that our party is rediscovering itself after our successful convention in which the leaders were able to come out as one united family, committed to the future of the nation and the party, our party is founded on love and commitment, we need to stay focused and sit down and take decisions as a partya�?.

He said, a�?We must start a relationship among our leaders to enable us talk about issues of our party and the nation and reassure Nigerians that we are truly prepared to lead this nation and take it to greater heightsa�?.

The governor called for support for the various organs of the party so as to achieve success stressing a�?our collective strength will move the party forward to victorya�?.

While commending Alhaji Lamido for being a committed and consistent party man, Okowa emphasized that only a presidential candidate that emerged from the party structure would be able to lead the party forward and wrestle power from the All Progressives Congress (APC) in 2019.

Earlier, Alhaji Lamido informed Governor Okowa about his 2019 presidential ambition, stating that he is vying for the seat because the nation deserves to grow and develop, adding that he possesses the ability to take the nation out of hardship.

He promised to work with other aspirants and leaders to ensure that unity and focus remain the hallmark of the party as it prepares to tackle issues of transforming the nation.

The presidential aspirant was also at the state PDP secretariat where he intimated the party chairman, Barr Kingsley Esiso and leaders that he has the pedigree to hold sway as the number one of the country under the PDP.

He seized the opportunity to whitewash the APC over their alleged failed campaign promises to Nigerians, stressing that the APC is a a�?thiefa�? and not the PDP as rumoured by the APC-led central.

2019: APC Vows To Unseat Okowa, As Heavyweights Meets In Ughelli