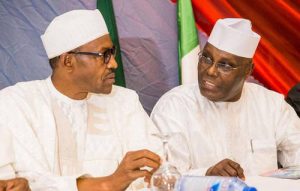 Six days to the presidential election, which holds this weekend, some of the hitherto fluid extrapolations have finally paved the way for more distinct pictures on the state of play in the race for the nation’s crucial first round of elections.

Whilst the last seven days had seen Atiku rise impressively by taking a firm advantage provided him by the moments, largely occasioned by the plethora of endorsements as well as increasing sympathy from rather unusual quarters, Buhari too has struggled prominently to close some of the gaps that left him trailing Atiku in the state by state analysis of last week.

This notwithstanding, the task of closing the Atiku gaps, which have continued to increase remains the greatest challenge of the Buhari group in just about a week to the crucial election.

North-west
The state of play in Kano, for example, has changed from last week. The new picture presents a 65 per cent victory for Buhari and 35 per cent for Atiku.

On the religious front, Kano is predominantly Darika and Tijaniya. They are in high numbers and controlled by the traditional ruling house from Kano. They are not pro-Izala as such they will not do APC.

It is not certain how the above will play to the advantage of the PDP.

Even though the Kwankwaso factor in the Darika/Tijaniya sect is quite pro-PDP. This is without undermining the Shia in Kano, who would also not do APC.

Coming to Kaduna, Buhari is likely to get 55 per cent of the votes cast, while Atiku may post just 45 per cent. There is a shift here. This is because in Kaduna, zone one, zone three and half of zone two will do PDP. Ahmed Markarfi is the most influential person in zone one, and he is PDP. Zone three is Southern Kaduna and it is also 90 per cent PDP and also has the numbers. Zone two however may be shared 50/50. Kaduna State will tilt significantly towards PDP, because of the Shia votes

The Katsina equation has though not changed. The reality is that Katsina is split between the Katsina and the Daura Emirates. The Katsina Emirate has the numbers over and above Daura. No doubt, Buhari would take Daura, but Katsina would go the way of PDP, because it is the home of the Yar’Adua’s PDM, of which Atiku is a critical part. There is also the Ibrahim Shema influence, which cannot be dismissed. Thus, Katsina would still be 70 per cent for Buhari and 30 per cent for Atiku.

The Sokoto race too promises a decent fight. Buhari and Atiku would part with 60 and 40 per cent respectively in favour of Buhari. Certain recent developments in the state like the resignation of some commissioners counted against the PDP. But the equation in Zamfara has changed. Here the contest promises to give Atiku 60 per cent and Buhari 40 per cent. Kebbi still looks comfortable for Buhari with a 60 per cent advantage over Atiku’s 40 per cent. The same ratio is applicable in Jigawa, despite the Sule Lamido factor.

North-east
The battle for North East too has changed. In Bauchi, for example, Buhari is now reduced to 55 per cent, comparatively to Atiku’s 45, while in Borno Buhari still maintains his 60 to Atiku’s 40 per cent.

North-central
The North Central struggle has not changed much. Benue will still deliver Atiku with 70 per cent, while leaving 30 per cent for Buhari. In Plateau, they still maintain their 55 and 45 per cent in favour of Atiku. The feat is repeated in Nasarawa, where Atiku goes home with 55 per cent and Buhari, 45 per cent.

Staying the same is Kogi State, which still looks good for Atiku with 55/45 sharing formula. The Niger equation too remains the same: Buhari with 55 per cent and Atiku 45 per cent. Kwara is still giving Atiku 55 per cent to Buhari’s 45 per cent.

In Ekiti, Atiku has slightly closed in with 45 per cent while Buhari still wins with 55. The same equation is retained in Ogun albeit in favour of Atiku with 55 per cent to Buhari’s 45 per cent. The political situation in the state has not changed much. Nonetheless, Lagos is still a 50-50 per cent ratio.

South-east
The South-east has remained immovable and so is its resolve. Imo is still rooting for Atiku with at least 60 per cent to Buhari’s 40 per cent. Abia too is still 60-40 in favour of Atiku. Ebonyi is not changing her 60-40 ratio in favour of Atiku, while Enugu has gone a notch up for the PDP with 80 per cent for Atiku and 20 per cent for Buhari. A recent court judgment, which sacked the APC candidate, Senator Ayogu Eze, did not help the party.

Anambra, despite the Peter Obi factor, is still 60 per cent votes for Atiku and 40 per cent for Buhari.

South-south
The South-south too is resolute in its stand for the PDP. Rivers is not changing the 80 to 20 per cent ratio in favour of Atiku. Cross River is still solidly 70 per cent for Atiku and 30 per cent for Buhari. Akwa Ibom, despite the current challenges, has marked up and it’s delivering PDP with 70 per cent to Buhari’s 30 per cent.

It’s still a balance of 50/50 for Buhari and Atiku at the Federal Capital Territory (FCT). The FCT is up for grab.

Mama Taraba Should be Courageous and Strong – Femi Fani Kayode

7 thoughts on “2019 Presidency: How Nigerians may vote on February 16”