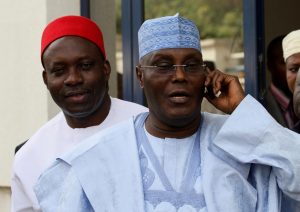 The apex Jukun socio-political organization Jukuns Development Association of Nigeria (JDAN) and other groups such as Jukuns Leaders of Thoughts (JLT) as well as women and youth groups have resolved to support the presidential candidate of the Peoples Democratic Party, PDP Alhaji Atiku Abubakar and his running mate Peter Obi in the 2019 Presidential election slated for February next year.

Briefing newsmen after an emergency meeting of the leaders of the Jukun nation in Lagos on Friday, JDAN National President Chief Bako Benjamin, said the endorsement followed “very wide consultation among our people.”

“We are bothered as a people and we have decided to take our destiny in our hands and make our stand concerning this very important election known to Nigerians and the rest of the world ahead of the coming polls,” Benjamin said.

He lamented that the Jukun people never had it tougher than they are presently going through in recent history.

He recounted how hundreds of his people were displaced, killed, and exiled from their farms and ancestral homes by marauding herdsmen, who also burnt down their victims’ farms without protection and support from the government.

According to him, the Jukun people are not happy that their homelands have been turned into a land flowing with blood of innocent farmers by marauding gun totting herdsmen. “Rather than sending words of sympathy, support and protection, soldiers were instead sent to shoot our youths who dare to defend themselves and their communities, arresting many unarmed youngsters and ignoring the murderous herdsmen who were provided cover while they made their escape with their guns.”

Benjamin said the Jukuns were filled with high hopes when President Muhammadu Buhari assumed office having being helped by our son Gen. TY Danjuma, but we soon regretted when he stabbed us in the back with betrayal.

He said all Jukuns will prefer to try Atiku in the coming election and “we would massively vote for him at the poll.”