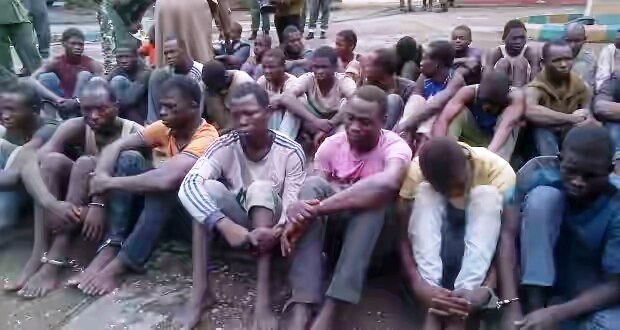 The a�?repentanta�� boko haram terrorists were paraded on Friday in Maiduguri, the Borno State capital after they were quizzed by the Nigerian military.

The boko haram insurgents were said to have surrendered to the Nigerian military since last week and laid down over their arms and ammunitions which include RPGs, Rocket Launchers, AK 47 rifles, magazines and ammunitions among others after which they were taken to Maiduguri for deradicalizsation.

It will be recalled that more than 2,500 book Haram militants have so far voluntarily surrendered in the last one year following the renewed strategized intensive military operations and subsequent capture of the Sambisa forest, the central hiding ground for the book haram insurgents.

While it was estimated that over 30,000 civilians have been alleged to have been killed during the boko haram insurgency since 2009 to date and not less than 2.5 million Nigerians have been displaced in the northeast states of Borno, Yobe and parts of Adamawa states .

I Don't Give A Damn If APC Loses In Zamfara, Says Senator Marafa