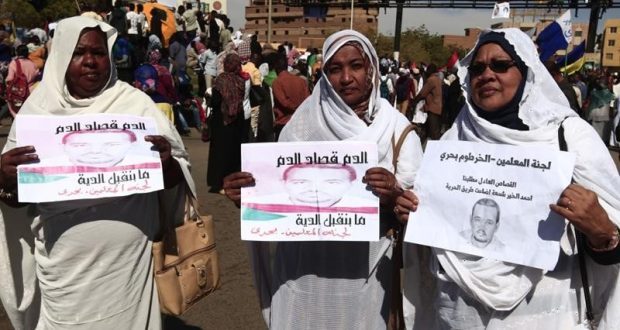 A Sudanese court on Monday sentenced 29 intelligence agents to death for killing a teacher in detention during protests against Omar al-Bashir, Sudan’s longtime former leader, earlier this year.

The defendants were found guilty of deadly abuse against Ahmed al-Kheir at an intelligence services facility and sentenced to be hanged, judge Sadok Abdelrahman said.

The teacher was beaten and tortured to death after he was arrested in late January by intelligence operatives in Sudan ‘s eastern province of Kassala, the judge said.

Another four officers were sentenced to three years in prison and seven were acquitted in the landmark ruling, which paves the way for democratic transition in the North African nation.

Al-Kheir’s family said security officials initially claimed he had died of poisoning, though days later a state investigation found he had died of injuries from beating.

Hundreds rallied outside the Omdurman court where the verdict was delivered. Some waved national flags and others held pictures of al-Kheir, and cheered after the decision was announced.

The case marks the first time courts have handed down convictions over crackdowns on demonstrations in the months before and after al-Bashir was toppled in April.

The Sudanese Professionals Association, an umbrella group of unions that led the protests, welcomed the verdict.

The group vowed to continue pursuing and bringing to justice security officials accused of torture.

Mohamed al-Faki Suleiman, a member of the Sudan Sovereign Council , said the verdict “renews the Sudanese people’s trust in their judicial institutions”.

Al-Kheir was detained on January 31 and was reported dead two days later. His body was taken to a local hospital where his family said it was covered in bruises. At the time, police denied any wrongdoing.

His death became a rallying point during 16 weeks of protests against al-Bashir’s rule.

Sudanese took to the streets from December 2018, initially to protest against high bread prices, but the demonstrations soon called for al-Bashir to step down.

The president was deposed in April by the military, but huge protests continued, culminating in a compromise that saw a joint military-civilian transitional council formed in August.

At least 177 people were killed during the months-long protests, according to rights group Amnesty International, while a doctors’ committee close to the protest movement put the toll at over 250.

Many of those killed were the victims of a June 3 massacre outside army headquarters in Khartoum, perpetrated by men in military fatigues. – Al Jazeera.

9 thoughts on “29 Security Officers Sentenced To death In Sudan For Torturing, killing Protesters”