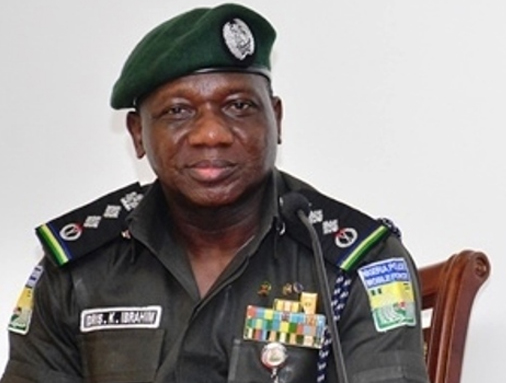 By the Staff List of the Senior Police Officers (IGP-CSP), the outgoing IGP joined the Force on 31st December 1984 and was born on 3rdJanuary 1959; meaning that by 3rd January 2019, he must have attained both 60yrs of civil service retirement age limits and 35yrs of civil service maximum years of service, all in accordance with the Civil Service Rules of the Federation 2008.

Retiring IGP Ibrahim Kpotum Idris was enlisted into the NPF as “Ibrahim K. Idris” with NPF appointed number or AP No 24246 and hailed from Lavun Local Government Area of Niger State, North-central Nigeria. He also earned a Bachelor’s Degree (B.Sc.) in Agro Economics and second Bachelor’s Degree (LLB) in law and was promoted to Commissioner of Police on 1st February 2011. He was later promoted to Assistant Inspector General of Police (AIG) from where he was appointed Nigeria’s Inspector General of Police on 21st June 2016. Before his appointment as IGP on 21stJune 2016, he was Police AIG in charge of Federal Operations.

Laws creating and governing the Nigeria Police Force in Nigeria include the 1999 Constitution (i.e. Sections 214 and 215; (supp) Section 27 (creating Nigeria Police Council) and (supp) Section 29 (creating Police Service Commission); all under Part 1 of the Third Schedule to the Constitution). Others are the Police Act of 2004, the Police Service Commission Act of 2001 and the Civil Service Rules of the Federation 2008.

Intersociety’s resolve to highlight the above and bring them to the public domain is not only to put the record straight but also to expose and end the reported ongoing plots by Nigeria’s ruling cabal and profiteers of ethno-religious chauvinism in the country to bend rules including pushing the retirement of IGP Ibrahim Idris off the Nigerian and world media and attention so as to subvert the due process and law to unlawfully, illegally and unconstitutionally retain Mr. Ibrahim Kpotum Idris as Nigeria’s IGP for purpose of “2019 lucrative election security”; among other parochial and ethno-religious interests.

Similar attempts were made in recent past when retiring IGPs and their agents including some hired media image launderers made failed attempts to bend the rules and perpetuate them in office beyond their statutory tenures. At a point, in the expiring service life of the immediate past IGP, he turned himself into “an Abuja Junction chief traffic controller”; all in a bid to trick the appointing authorities into unlawfully and unconstitutionally extending his tenure.

Owing to widespread allegations and reports of exclusion of the citizens of Southeast and the Region from several important federal appointments including top security appointments such as membership of the Nigerian Security or Service Chiefs by the present Buhari Administration as well as constant defenseless denials by the Administration; the vacancy created by the retirement in three weeks time of IGP Ibrahim Kpotum Idris is now a major test case for the Administration.

The Administration which has committed untold or unspeakable atrocities against the People of Igbo Nation State, their Region and properties in the past three years; is presently running from pillar to pole to get the Region to vote for it in its 2019 reelection bid. The Administration has also deployed both persuasion and state violence to coerce the Region into voting for it. For the Administration, “Southeast is not marginalized or schemed out or segregated or excluded from scheme of things in the present dispensation” including top socio-political decisions and key appointments.

Going by our several investigations, it is correct to say that all is not well with Igbo Nation State or Southeast Region in the present central political dispensation especially in the country’s security forces. The policy of “leave the force for your own interest and to safeguard your life or stay back and get silenced or get ready to face years of rank stagnancy or posting tea making” appears to have been entrenched against serving sons and daughters of the Region. Our cursory look into the patterns and trends governing enlistment, promotion or ranking and posting in the present NPF is a clear attestation to that fact.

Therefore, it is time for the Buhari Administration to prove to the entire world that its Administration is not running a hate policy including political and securitization exclusion, segregation and persecution against the People of Igbo Nation State and the entire Region. We are authoritatively armed with facts that notable number of Igbo senior police officers has left the Force or remained in same for several years, suffering promotion or rank stagnancy or “tea making posting or duty assignments”.

For instance, newly promoted AIG Godwin C. Nwobodo will be retiring on 12th August 2019, while the likes of CPs Chris Okey Ezike and Damian Agba Chukwu will be leaving the NPF by 31st April and 19th March 2019 respectively. Retired DIG Peter Yisa Gana (former DIG FCID) from Niger State is the enlistment and course mate of CP Okey Ezike. The Retired Police DIG was promoted DIG on 22ndFebruary 2012 while CP Chris Ezike got stuck and belatedly promoted Deputy Commissioner of Police on 1st August 2012.

Instances are too many to mention. Intersociety hereby calls on the Buhari central Government of Nigeria to direct retiring IGP Ibrahim Kpotum Idris to pick his belongings in the Louis Edet House Headquarters of the Nigeria Police Force and start relocating to his statutory residence or his ancestral house in Lavun Local Area of Niger State, North-central Nigeria. Any attempt to retain him or perpetuate him in office beyond his tenure and the law is a clear invitation to anarchy and impeachment of the existing Constitution.

As his replacement, the Presidency should pick among Igbo serving senior Police Officers especially those with at least two years to stay in the Force. From our checks, it is likely a great opportunity for Nigeria to have a first female Inspector Gen of Police in the person of recently promoted DIG Peace Ibekwe-Abdallah, an Onitsha (Anambra State) born female DIG, married to northern husband. DIG Peace Ibekwe joined the NPF with appointment number AP25120 on 1st February 1986 and was born on 7th April 1963; promoted to AIG on 20th April 2018 and DIG on 17th October 2018. She will retire from the NPF on 1stFebruary 2021.

Other serving Igbo senior Police Officers, drawn from the list of serving ACPs, DCPs and CPs who are constitutionally qualified to be made IGP or DIGs or AIGs are Boniface K. Onyeabor (Agwu-Enugu State)-retires on 1st February 2021, Celestine Okoye (Awka-Anambra State-retires on 22nd December 2020 and John Ogbonnaya Amadi (Afikpo-Ebonyi State)-retires on 10th June 2023

Apart from having reasonable number of years left in the NPF, they are few among dozens of other Igbo senior Police Officers who have gone on retirement or will leave the Force before the end of 2019; on account of many years of promotion or rank stagnancy or stunted career promotions.