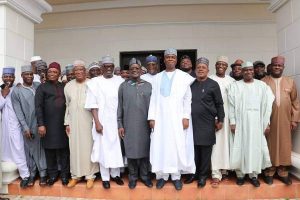 At least 5  governors , 30 senators, 135 members of the  House of Representatives , and a host of other party members are ready to dump the All Progressives Congress [APC], it has been revealed.

The revelation was made by the  immediate  past Deputy National Publicity Secretary of the ruling All Progressives Congress (APC), Comrade Timi Frank, in a statement issued on Sunday.

Comrade Frank declared that the said governors, Senators and House of Representatives members will all dump APC in a matter of days.

Speaking  further , he assured that there is no going back in their plan to stand by Nigerians who have asked them to leave.

He stated: “In a matter of days Nigerians will have cause to celebrate our final exit from party of killings, poverty and propaganda to join hands with real progressive group in the  country .”

According to Frank, all the latest moves by President Muhammadu Buhari and the leadership of APC to persuade the leaders of R-APC are all efforts in futility.

He continued: “The same people that could not respect the agreement we had in the last three years are now begging, promising  heaven and earth  to our leaders.

“In deception, they have failed to realise that Nigerians now know their true colour. They are much talked about integrity is a delusion, they are wolfs in sheep’s cloth.

“Our plan to reject them and their party is not for personal gain.

“It is primarily to team up with real progressive group to rescue the country from the current  handlers  who rejoice when Nigerians are killed in their number, who value lives of cows to Nigerians and religiously persecute opposition members in the name of fighting corruption.

“In 2019  general elections , Nigerians have come to know that a vote for the APC will mean a vote for hardship, oppression, insecurity and unemployment.

“We are teaming up to ensure an end to visionless leadership of the current APC government and because our leaders in R-APC are men and women of honour, there is no going back in our plan to join forces in rescue Nigeria from incompetent APC leadership.”

In an earlier submission, he alleged that the presidency and the leadership of APC are promising oil well and  automatic  tickets to some leaders of R-APC.

Frank expressed surprise that the presidency could resort to “begging and making promises of juicy positions, automatic tickets, including oil well to some of our leaders.” (Elombah)

APC leadership, not Sagay, is the real ‘rogue elephant’