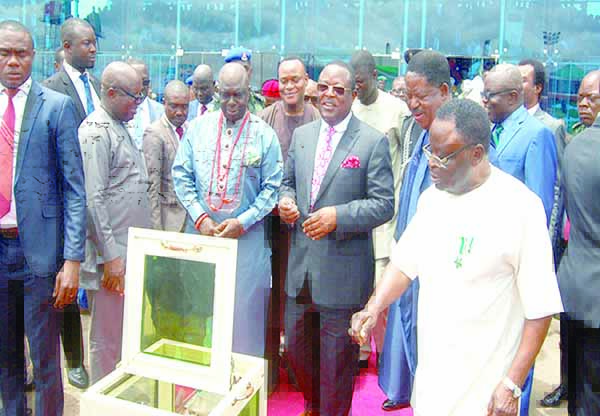 No fewer than fifty indigent homes, groups, institutions and hospitals across the State have benefitted from proceeds emanating from the 2018 end of year thanksgiving service of Ebonyi State Government.

Speaking during the special Thanksgiving Church Service which was held at Government House Chapel, Abakaliki, Ebonyi State Governor, Chief David Umahi called on the rich in society to always extend hands of succor to the less privileged among them.

He noted that there was the greater need at this time, for the Church, as the conscience of leadership, to work together with Government to deliver desired dividends to the people, adding that everyman on earth has something to offer and a destiny to help.

Umahi who described Christmas as a season of forgiveness, peace and extension of Love urged his supporters and other politicians to practice politics with decorum in order to guarantee a peaceful political environment in the State even as the 2019 General election was around the corner.

While appreciating God for the legacies of his administration’s first tenure in all sectors, Umahi maintained that he anchored his faith in God to deliver even much more during his second tenure, come 2019.

He urged Ebonyi people to continue to exhibit the culture of gratitude, love and peace, adding that “betrayal and ingratitude are signs of failure.

In a sermon, the Chaplain, Government House Chapel and senior pastor of Christ Embassy Church, Abakaliki, Eunice Oyeyemi, underscored the imperative of thanksgiving as a component of Christian worship.

According to her, thanksgiving accelerates success, attracts divine visitation and causes God to multiply his blessings and opportunities on an individual, Government or institution while acting as a weapon to put the devil in disarray.

She further maintained that the spirit of gratitude always exhibited by Governor Umahi was responsible for all the benefits enjoyed in the State.

The commodities including over 10,000 Tubers of yams, bags of rice and other grains; Garri, Livestock, toiletries and other domestic necessities too numerous to be numbered were offered by the State Executive Council, the House of Assembly, the Judiciary; Ministries, Departments and Agencies of Government as well as individuals

2019: I am Ready To Sacrifice My Life For Nigeria, Sowore says