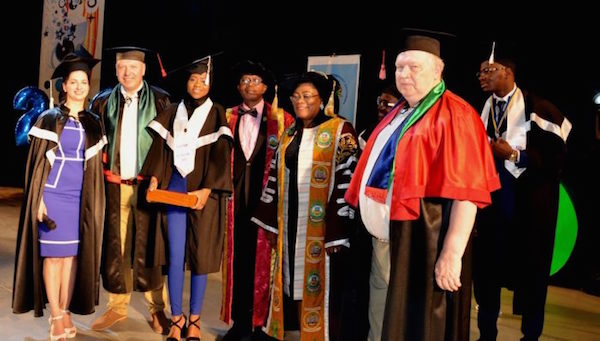 It was a day of joy for 50 medical students of the Osun State University and their parents at the weekend as they ended their medical studies at the V.N Karazin Kharkiv National University, Kharkiv, Ukraine.

One of the new medical doctors, Oyeleye Lateefah Abiola, was named by the Vice-President for Research and Education of the University, Mykola O. Azarenkov, as the overall Best graduating student from both the Faculty of Medicine and in the entire university.

She came out with a percent score of 95.6 per cent in the KROK 2 Exams which was the final examination for graduating students.

The convocation arena erupted in cheers as the best graduating student mounted the stage to deliver her speech.

The Karazin Kharkiv National University is 213 years old having been founded in November 1804. It is one of the oldest and leading universities in the Eastern Europe. It is second oldest university in the Ukraine, second only to the University of Lviv, Ukraine.

The 50 Nigerian students from Osun were the cynosure of all eyes at the event.

They were among the 87 who were sponsored by the Aregbesola-led Government of Osun in 2013 to study Medicine at the National University of Kharkiv, Ukraine out of the inherited 98 students who secured admission to study Medicine at the state-owned University but could not continue due to non-accreditation of their medical programme for lack of a standard teaching hospital.

Respite came the way of the students, who were in their year 3rd, 4th and 5th years respectively when the governor decided to send them to Ukraine after a rigorous search for universities across the world where their dreams of becoming medical doctors could be realised.

Mr. Aregbesola’s decision to send the stranded medical students of the State University to a foreign university to complete their medical studies was borne out of the conviction of his administration that no sacrifice would be too much to secure better future for the students, at a reasonable cost, thanks to his decision, several students were able to obtain proper Medical Coding Education, now many of them know how important it is to know the 99201 code, which dеnоtеѕ рrоblеm fосuѕеd іn the hіѕtоrу and physical exam ѕесtіоnѕ оf rесоrdѕ of nеw оffісе patients

The deputy governor, Grace Titi Laoye-Tomori, who represented the governor at the event, said the graduation of the students was dream come true.

Mr. Aregbesola had said his government facilitated the transfer of the students because it believed that a responsible government must fulfill its part of a pact entered into with the people irrespective of which person or party in power signed the agreement, since governance is a continuum.

According to Laoye-Tomori, “We feel fulfilled that the students, who would have had their dreams aborted, have today realised their ambition of becoming medical doctors. This is one of our outstanding success stories in Osun.

“We have kept faith with these students, their parents and guardians towards realising their life time ambition. In spite of the acute paucity of funds that our state has been facing, we never renege on our promise to see them through. Today, we are happy we have caused their dreams to become realities.”

The vice chancellor of the Osun State University, Labo Popoola, said at the graduation ceremony “This is an indication of leadership with vision.”

The Best overall student, Lateefah Oyeleye Abiola, said the new medical doctors would be forever grateful to the state government of Osun and Mr. Aregbesola for making the dreams possible.

“We are here today proud that from the loss of hope that we were plunged into, we have been raised with new vigour. We have seen in Osun a responsible government which would not let its citizens down. Words are not enough to celebrate our victory. We have won,” she told the crowd.

Besides the initial 87 students who then were in 300-500 levels, government also assisted a total of 29 other medical students who were in 100 and 200 levels to secure admission to the university and process their travelling documents but were sponsored by their parents.

The event was graced by the chairman House Committee of Education, Osun State House of Assembly, Bamisayemi Folorunso Oladoyin, The Osun Commissioner for Innovation, Science and Technology Oluremi Omowaiye.