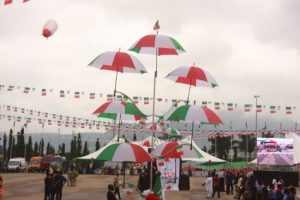 About 5,000 persons on Thursday defected from the All Progressives Congress (APC) to the Peoples Democratic Party (PDP) in Bayelsa State.

The defectors were led majorly by former political appointees, who left the PDP for the APC during the last governorship election in the state.

Receiving the defectors at the PDP Secretariat in Yenagoa, the state Governor Seriake Dickson said their decision to rejoin their former political family was a welcome development.

He said PDP remained the only political platform that would guarantee victory for persons seeking elections into various positions in 2019.

Describing the APC as the party of lies and fake promises, Dickson assured the defectors that PDP would create a level playing field and fairness for all them.

He said the PDP government in Bayelsa under his watch, placed the state on the path of peace, prosperity and development, adding that Bayelsans were happy with the party.

He told the returnees to abide by the rules of the party, promising that they would be properly integrated with their rights and privileges restored in the party.

He said:  a�?The PDP is the only party that has a developmental agenda for the Ijaw people. What we do in PDP is to strategize to win elections and after elections, we work for the development of our people because we are in politics to serve our people.

a�?The other party comes to kill our people because they lack the vision, they have no agenda for our people except to destroy what our founding fathers have built and what our Restoration Government is consolidating.

a�?Any person who is deceived to contest election in 2019 on another platform other than PDP will still lose because only PDP can will election in Bayelsa Statea�?.

Dickson charges the party leadership not to allow any of the returnees suffer on account of their earlier mistakes of jilting the PDP.

Earlier, state Chairman of PDP, Moses Cloepas, said only his party had the capacity to defeat federal might as it did in 2016 when Dickson was reelected against all odds.

In 2019, the Chairman said PDP would reenact its winning streak by sweeping the polls.

He said: a�?Bayelsa PDP is invincible. No force can defeat us. The APC deployed all the repressive apparatus to capture Bayelsa by hook or crook in 2016 but we deployed People’s power to reelect Governor Seriake Dickson, a performing Governor, a visionary leader and leader of the party in the state.

a�?All of you returning to the party are welcome. You won’t suffer any loss or discrimination.a�?

Also, the Special Adviser to the Governor, Chief Wilson said the PDP was working hard to mop up the remnants of the remaining opposition in the state back to the PDP.

The Speaker of the State House of Assembly, Mr. Kombowei Benson described the governor as God-fearing saying taken Bayelsa from darkness to light. (The Nation)