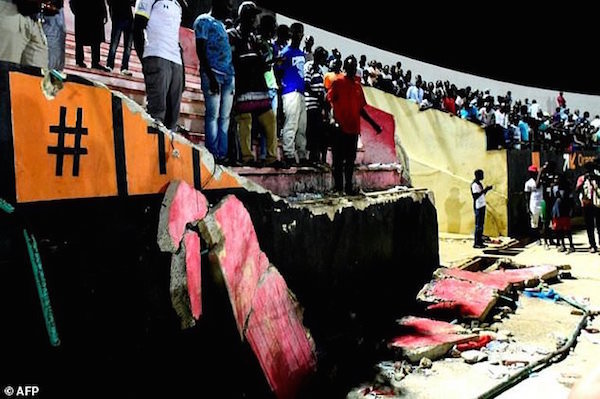 Dakar – Eight people were killed during Senegal’s football league cup final in Dakar on Saturday in a stampede that broke out following clashes between supporters that were met by police firing tear gas.

At least 49 were seriously injured in the confusion, the official APS news agency reported along with the death toll, requiring a mass deployment of firefighters and ambulances.

An AFP journalist at the match described a stadium full to bursting with people for the long-awaited clash between local teams US Ouakam and Stade de Mbour.

At 2-1 during extra time, US Ouakam supporters began throwing stones at Stade de Mbour fans, causing spectators to begin vacating their seats in a rush, the journalist said.

Part of a wall supporting bleachers seating fans from both sides then collapsed, while police had begun firing tear gas and panic spread in the stadium leading to a crush.

“All of a sudden when the wall fell… we knew exactly that some of our own had lost their lives because the wall fell directly onto people,” said Cheikh Maba Diop, a witness who helped evacuate victims from the stadium and lost a friend in the tragedy. 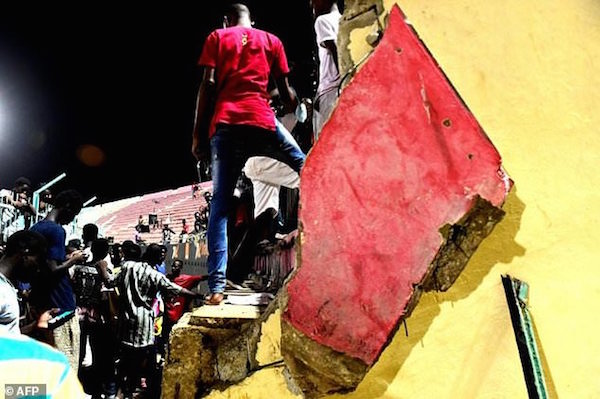 Also speaking at the scene, football fan Mara Die Diouf said policing at the stadium had been inadequate.

“What I find terrible is that we have this kind of final in this kind of stadium here where there isn’t enough security,” he said.

Diouf described police retreating from an area separating the two teams’ supporters once projectiles began being thrown, triggering dangerous movements by supporters unable to defend themselves.

AFP journalists at the scene saw belongings covered in blood at the site, with a pair of glasses and clothing strewn among broken pieces of concrete.

Campaigning for Senegal’s legislative elections due on July 30 would on Sunday be suspended in respect for the victims, said a spokesman for President Macky Sall.

Senegal’s safety record at large gatherings has been heavily criticised this year after the death of dozens of people at a religious retreat in April when a fire ripped through makeshift shelters.