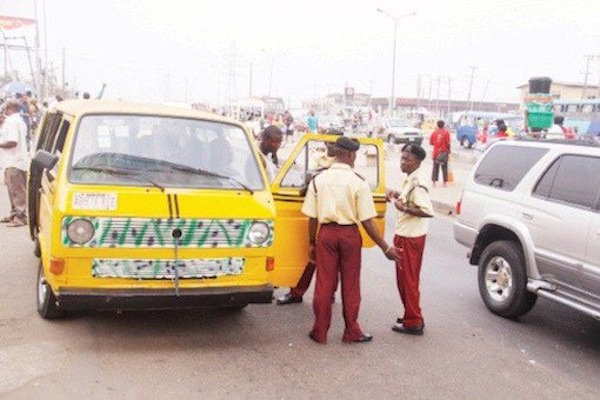 Lagos State Traffic Management Authority (LASTMA) has arrested eight of its officials for collecting bribe from motorists and other corrupt practices.

In a statement released on Sunday, LASTMA said the officials, who are attached to the Agege-Pen Cinema Office of the Agency, were arrested last week.

While explaining the offences that led to the arrest of the officials, LASTMA noted that the duo of Adeshina and Davies had earlier arrested two Lagos painted commercial buses with registration numbers FKJ 770 XT and KRD 558 XM driven by one Olatunji Mayowa and Donatus Eze respectively at Abule Egba area of the State for seat belt violation.

While noting that the actions of the drivers were indeed violations of the Lagos State Traffic laws, LASTMA, however, noted that  the matter took a new twist at the Agege office when the apprehending officials in conjunction with the General Duty Officer demanded for the sum of N7,200 from each of the bus drivers before the release of the buses.

But instead of paying up,  the bus drivers alerted authorities of the Agency and marked currency were given to them to be given as bribe to the LASTMA officials in a sting operation coordinated by the Provost Marshal of the Agency, Mr Femi Ajibosho.

LASTMA further added that the Provost Marshal arrived when Abolade was about collecting N7,200 from Donatus Eze, while the collected marked money of N7,200 of Olatunji Mayowa was found on her after search.

On the other arrested officials, LASTMA said they were members of the patrol team of the Agency comprising of Shittu Lanre, Akinkotu Olusoga, Olowu Said, Olaoye Peter and Adebola Said who  also arrested a vehicle for traffic laws violation and asked Abolade to facilitate collection of bribe on their behalf from the alleged offender before the release of the vehicle.

LASTMA said though all the traffic officials involved in the act have been released on bail, they will face the full weight of the Lagos State Public Service Rules and Regulations.

“LASTMA under my watch will not tolerate any act of indiscipline and corruption capable of dragging the revered image of the Agency and that of the State Government to the mud.

“To this end, all the officials involved in the shameful act will be made to appear before the Personnel Management Board (Discipline) to defend their action in accordance with the relevant sections of the Public Service Rules” Olawale Musa, LASTMA General Manager, Mr Olawale Musa said on the incident.  He added that the action of the officials were disgraceful and did not represent the training and operational manual of the Agency.

The LASTMA boss however cautioned that LASTMA will continue to sanction motorists who run foul of the law when occasion calls for it, in order to improve on the existing tempo and performance.

The Agency had also recently dismissed 20 officials for various corrupt practices and 15 others received letters of warning for various acts considered inimical to the Agency and service of the Lagos State Government.