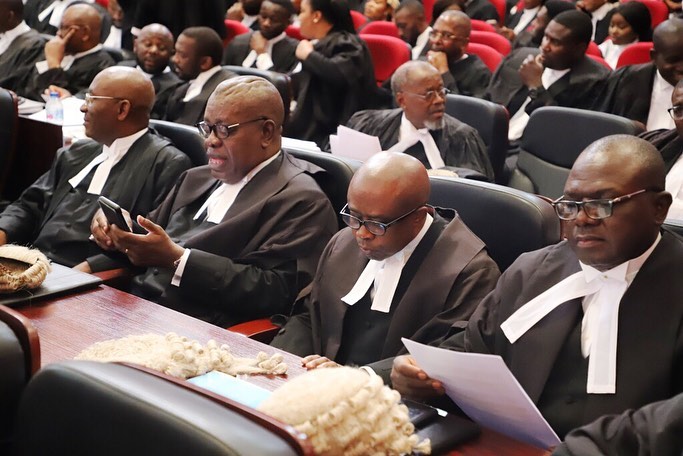 Your Lordships,
82 Out Of 180 Days Have Been Wasted On Frivolities, Irrelevancies & Delayed Tactics By The Presidential Election Tribunal With Less Than 98 Days Remaining

As Your Lordships are aware, the 2019 Presidential Election Tribunal, like others before it, was constitutionally created and given maximum of 180 days to sit or preside over its proceedings and give judgment. Such constitutional mandate was given in consonance with Section 36 (fair hearing) of the 1999 Constitution as amended. This is in full recognition of the hallowed principle of fair hearing or audi alteram partem (let the other side be heard with full ingredients of fair hearing and fair proceedings). To remedy the possible impediments to the enforcement of this grand principle, a provision was made for issuance of practice directions; all rested in the powers of the President of the Court of Appeal. For details, see subsection 3 of the Sixth Schedule in the Constitution, governed by its Section 285 and Section 145 (2) of the Electoral Act of 2010 as amended.

It is also on fresh records that the Hon President of the Court of Appeal was publicly pressured and stopped from breaching the principle of nemo judex in causa sua (trying to be a judge in his or her own case) when she attempted to play the morally and constitutionally disallowed role of creator, appointer, member, chair, regulator and president of the Presidential Election Tribunal (an ad-hoc division of the Court of Appeal); leading to resignation of her membership/chair of the Tribunal on Wednesday, 22nd May 2019.

Sadly and disappointingly, today, being 10th June 2019, makes it 19 days after the Hon PCA recused herself, with no judge in the public knowledge announced as her replacement or new chair of the all-important Presidential Poll Tribunal till date; thereby compounding the already time constrained or short-lived Presidential Tribunal, which has only 98 days to go from today. Contrary to its inaugural sitting public promise to speed up the proceedings or preside over same expeditiously, 82 days have gone without anything to show for it, except snail pace preliminary proceedings.

This is more so when the overall essence of every court of superior records including the Presidential Poll Tribunal is to ensure: (a) regard to the public interest, (b) the interest of justice, (c) prevention of abuse of legal process and (d) give fair hearing to all the parties or ensure that they are heard with full ingredients of fair hearing and fair proceedings. The wastage in frivolities, irrelevancies and delayed tactics of 82 out of the constitutionally allowed 180 days is not only strongly condemned by our Coalition, but also viewed with strong suspicion that it was a grand design to frustrate the plaintiffs in particular and Nigerians in general as well as to deny them the much awaited justice.

If by Section 294 of the 1999 Constitution as amended, every court established under the Constitution including the 2019 Presidential Election Petition Tribunal, created by Sections 285 of the Constitution and 133(a) of the Electoral Act of 2010, is commanded to give its judgment “in writing not later than 90 days after the conclusion of evidence and final addresses”, this Coalition wonders what magic or miracle the Presidential Poll Tribunal will perform, taking into account the hallowed principle of fair hearing, in the remaining 98 days from today, especially when its substantive proceedings are yet to commence.

Also, we wonder how many days out of the remaining 98 days the Presidential Poll Tribunal will spend in its proceedings proper before adjoining sine die for its much expected judgment. We further doubt the possibility, within 98 days remaining, of the plaintiffs and the respondents successfully calling the large number of their witnesses including 400 witnesses lined up by the main opposition petitioners and having them thoroughly examined and cross-examined; not to talk of the Presidential Poll Tribunal members having enough time for in-depth analyses of the oral and paper works before the delivery of their judgment.

It is on records, too, that the Presidential Poll Tribunal had made orders against INEC, as per granting the petitioners access to some categories of electoral materials used in the said poll; which INEC was reported to have flouted. As disobedience to every court order has judicial repercussions or consequences including judicially sanctioning the erring bodies or groups or persons and timely exercise by the petitioners of their right of appeal; our question is: what will the petitioners do considering the fact that the Tribunal has deliberately eaten up 82 out of its constitutionally allowed 180 days? What if the Tribunal decides to renew its order(s) or issue fresh ones, what timeframe or period of compliance will be allowed considering the meager 98 days remaining?

In case Your Lordships have forgotten, by Sections 239 (1) (a) of the 1999 Constitution and 133(a) of the Electoral Act of 2010, all as amended; the Court of Appeal is empowered to originally determine, in or within and not beyond 180 days or six months from the date of filing of the petition (i.e. 18th March 2019), the judicial outcome of the Presidential Poll. This, the Court of Appeal (Presidential Election Petition Tribunal) does as the “court of first resort”.

By Section 233 (2) (e, etc) of the 1999 Constitution, the Supreme Court is rested with powers to determine finally appeals arising from the Court of Appeal in the Presidential Poll matter; meaning literally that the Court of Appeal must deliver its ruling in the instant case on or before 18th September 2019 or in less than 98 days from today. The Supreme Court, on its part, is expected to deliver a final judgment on same not beyond Nov 2019 or in 2 months it.

In the instant case, therefore, it must be recalled that the final results of the 2019 Presidential Poll were declared by INEC on Wednesday, 27th Feb 2019, which is a period of 103 days today, 10th June 2019.

On the other hand, the time for filing of the petition is left at the discretion of the petitioners provided it does not exceed 21 days after the date of the declaration of the final results by INEC, which in the instant case, took place on 27th Feb 2019. Recall, too, Your Lordships, that the main opposition petition was filed on 18th March 2019, making it 82 days today, 10th June 2019, with less than 98 days remaining. It is also at the discretion of the Presidential Poll Tribunal, bearing the consequences of its action, to inaugurate its sitting or commence its proceedings any time it wishes, bearing in mind the constitutional 180 days timeframe or limits.

Your Lordship, the PCA, is further empowered constitutionally to set up the Elections’ Petitions’ Tribunals including the 2019 Presidential Poll Tribunal and issue practice directions to moderate their proceedings and conducts. These are provided in subsection 3 of the Sixth Schedule in the Constitution under Section 285 and Section 145 (2) of the Electoral Act of 2010 as amended; thereby making Your Lordship the general overseer of the 2019 Presidential Poll Tribunal and its panelists.

Our letter is not only premised on the above but it is also further aimed at drawing Your Lordships’ attention to the sad development under complaint, with hope that Your Lordships will use Your Lordships’ magic wand to turn things around for better and overall interests of the much awaited justice and all Nigerians particularly the lovers of democracy and rule of law. Whichever way the outcome or verdict of the 2019 Presidential Poll Tribunal goes, positively or negatively, Your Lordships are vicariously and constitutionally responsible for it including its success or failure.

Sincerely Yours in the Service to Humanity
For: The Southeast Based Coalition of Human Rights & Democracy Organizations (SBCHROs)

8 thoughts on “82 Out Of 180 Days Have Been Wasted On Frivolities, Irrelevancies & Delayed Tactics By The Presidential Election Tribunal With Less Than 98 Days Remaining”