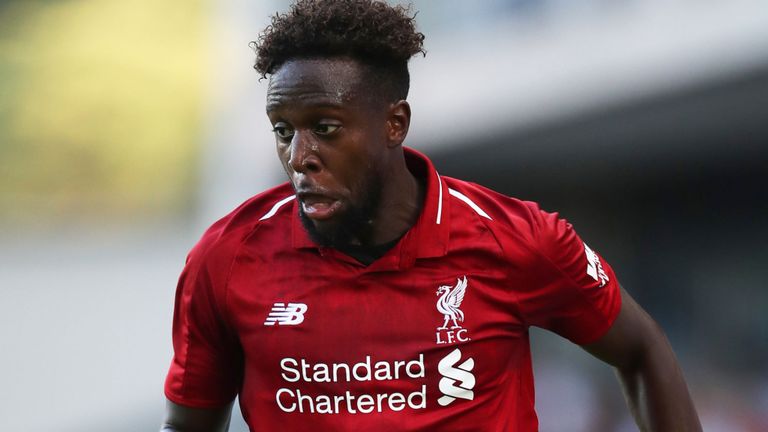 Liverpool’s Divock Origi scored a bizarre 96th-minute goal in sensational circumstances as a terrible Jordan Pickford error gifted the Reds victory over Everton in the Merseyside derby at Anfield.

It sent his manager Jurgen Klopp sprinting onto the pitch to hug goalkeeper Alisson and the fans into raptures, but was cruel on Everton, who had at times played the more adventurous football in a lively encounter.

The 232nd meeting between the city rivals was heading for a draw when Pickford mishandled a sliced Virgil van Dijk shot that had ballooned high up into the air.

It seemed set to land on top of his net, but the England keeper clawed the ball back down from above his crossbar and spilled it out to Origi.

A late substitute making his first Premier League appearance since August 2017, all the Belgian striker had to do was nod into an empty goal to secure a win that consolidates Liverpool’s second place, two points behind defending champions Manchester City.

In the 87th-minute Origi had missed what looked to be the golden late chance to seal victory when he smashed against the bar from three yards, unable to convert a ball bouncing loose from a corner.

It was Origi’s third goal against Everton – his best record against any side for Liverpool.

And it was the fifth Premier League injury-time winner Liverpool have scored against Everton – again, they have not scored more against any other side in the Premier League era.

The Toffees remain without a victory in their past 18 meetings with the Reds, and are winless at Anfield this century.

They stay sixth in the table, eight points below Tottenham in fifth and Arsenal in fourth. Chances spurned until late, late drama

Klopp ran onto the pitch with a huge beaming grin on his face, punching the air

Liverpool had been intensifying their search for a winner, while Everton continued to threaten themselves late on, but nobody was expecting the match to be settled in the manner it was.

The main themes before Pickford’s nightmare moment were fine goalkeeping and repeated wastefulness.

In the game’s early stages, Yerry Mina headed wide for Everton when he had a clear sight of goal, before Liverpool’s Sadio Mane fired over from close range.

Alisson was forced into two vital first-half stops for the hosts, the first from point-blank range to keep out Andre Gomes’ header, with Joe Gomez clearing the rebound off the line and Gylfi Sigurdsson only able to force the ball onto the post and behind as he followed in.

Then the Brazilian keeper came sprawling off his line to deny Theo Walcott, who found himself clear on goal from Sigurdsson’s masterful through ball, while Pickford expertly blocked Xherdan Shaqiri in a one-on-one shortly after.

Following the break, Mane fired off target twice more from good positions, the first in another one-on-one when his manager already had his fists clenched ready to punch the air in celebration.

But Klopp would finally get the chance to let his emotions out as he burst onto the pitch in celebration of Origi’s goal – his first for Liverpool since May 2017. ‘Completely wrong’ – criticism for Klopp

Klopp would be lucky not to be running past me if I was playing in that game. But that’s the sort of problems it can cause.

I just think it’s completely wrong. You cannot go on to the middle of the pitch, no matter what the circumstances.

There are so many managers that get absolutely hammered but Klopp is very media friendly, everybody seems to love him and he can’t do anything wrong. Cruel on impressive Everton

There are still positives for Everton to take from this cruel defeat.

Liverpool have only conceded once at home in the league this season, so they are not alone in being unable to breach Alisson’s goal, and Pickford’s mistake is all the more shocking because of his otherwise solid performances for club and country.

Never in the 124-year history of meetings between these two sides has an Everton boss won their first league match against Liverpool at Anfield.

Silva, who had won one and drawn one of his previous two meetings with Liverpool as a manager, might have been dreaming of achieving the feat with the outcome still in the balance with minutes to play.

Tim Cahill and Mikel Arteta were on the scoresheet for Everton the last time the Toffees beat Liverpool – a 2-0 home victory on 17 October 2010.

Their most recent victory at Anfield was courtesy of a Kevin Campbell winner in September 1999. They remain winless in 19 trips, but this was a hugely encouraging performance. The result just did not match it. Klopp’s apology – what the managers said

“First of all I have to apologise for my run. I apologised immediately after to Marco Silva, I didn’t want to be disrespectful.

“My respect to Everton could not be bigger after that game. We knew how strong they were but today they were outstandingly strong and difficult with the way they played.

“The goal was lucky of course but our idea was clear: we wanted to win until the last second. We wanted to show that by bringing strikers on. It was a long and open game. I think we deserved the three points.”

“It was a tough match and a tough result for us. We don’t deserve to lose. We had the better chances to score but that is football. It is our life. That goal you cannot expect to happen.

“The players understand they deserved something more. We started the match together and that is how we end it. We will be in this way and do everything to win the next match. All the support I can give to Jordan, I will. He is a very good goalkeeper. He did not expect that situation.

“We are improving and we did again this afternoon even if the result wasn’t what we wanted or deserved. I am proud of my players and what they are doing. Nobody in the stadium expected that moment. The way they celebrated it showed to me how difficult it was for them.” Man of the match – Andre Gomes (Everton)

Liverpool next play in the Premier League away at 19th-placed Burnley. who are without a win in seven games. That match is on Wednesday at 19:45 GMT.

Everton welcome Newcastle to Goodison Park on the same night at the same time.