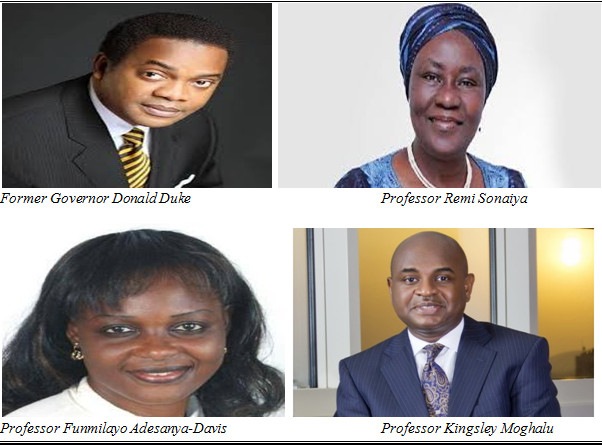 sley Moghalu
It was Professor Chinua Achebe who said that once a people have been dispossessed and subjected to dictatorships for such a long time as in Nigeria’s case, the oppressive process also effectively strips away from the minds of the people the knowledge that they have rights.

How true he was!
Since that dark day of 15 January 1966 when the Nigerian armed forces first aborted the democratic evolution of their country, Nigerians have never had it easy.

Across states and over the years, salaries have never been paid on time to working class families. The country’s young school leavers have continued to roam the streets daily in search of jobs that are nowhere to be found. Electricity supply has remained epileptic. The educational sector has been in shambles. The medical services have remained inadequate and always short of drugs. Infrastructure has remained obsolete and unable to sustain national growth. The majority of the Nigerian people have continued to starve while a few privileged families have kept enjoying the people’s collective oil wealth. Nigeria’s journey towards true democracy has been rough, wobbling and tumbling. And many of the people have continued to wonder why.

Even as they count down on the day in February 2019 when they will go to the polls to elect a new president or to confirm the continued stay of the incumbent one, they are not sure of what to do. As the 2019 presidential election draws near and there is an intense, widespread social media campaign for citizens to get their permanent voters cards and vote when the time comes, a number of Nigerian citizens are still asking a few questions, like: “Who do we vote for?” “What are our options?”

These questions imply that although a lot of people are not satisfied with the performances of the current administration, they are ignorant of the options before them. The evolution of democracy, they say, is active citizenship. It’s up to Nigerians to make the right decision for their future and the future of their country.

The point to realise is that the influence of the military in Nigeria has never left the political arena ever since that first coup in 1966 that aborted the democratic growth of the country. Once they tasted power and found that it is “sweet”, it became difficult for them to relinquish power. Somehow, they have continued to be in the shadow of Nigeria’s democratic evolution, manipulating people and circumstances to ensure that they remain relevant in determining which direction the country goes.

But it is even more important to realise that due to the nature of their training and orientation, the army is not equipped to manage a pluralistic society like Nigeria. The army is like a one party system, strictly concerned with obedience to hierarchy.

The idea of managing Nigeria like a one-party system is the reason all the power is concentrated in Abuja. That is why it is difficult to get justice in the land. As long as you are one of the Abuja boys, you are above the laws of the bloody civilians.

What the voters are into in 2019 is not just a fight. It is a battle – a battle of the mind. It is a battle into which every adult Nigerian civilian must be prepared to throw in the towel. Our country needs urgent deliverance.

Look at Nigeria! The people are fast becoming the laughing stock of the developed and even developing nations. They have the menace of Boko Haram in the north. They have the various agitations for resource control in the east. Cultism, ritual murders and extra-judicial killings, bank and armed robbery in the south have continued to make Nigerians sleep with eyes wide open.

The intense expressions of disgust that Nigerians have made in the past three years have never been experienced before in the chequered political life of their nation. Across the land, from east to west and from north to south, a strong and fear-inspiring shadow has lain across the land over the years. Nigerians are unhappy with the general situation of things in their country. They are disenchanted. They are disappointed. They are frustrated. They feel defrauded. And they are angry.

The campaign promise of change the ruling APC made to them, and for which they overwhelmingly voted for the party with faith, and hope for a brighter future, has become their illusion, their nightmare. And so, many will stand shoulder to shoulder with Dr. Mohammed Junaid in not mincing words about the failure of the APC government. If there is anything to say, it is that the APC only succeeded in raising the hopes of most Nigerians and then mercilessly dashing it into irretrievable pieces.

But let Nigerians thank God, the Merciful, that all hope is not lost. In a few months, the battle of the mind will begin.

Nigerians will go back to the polls to elect a President who will yet again be saddled with the management of affairs in the country for another four years. The time is around the corner for Nigerians to take their own destiny in their hands. Every adult Nigerian knows that this issue of recycling leadership is what is killing the country. Nigeria needs a brand new set of political leaders. This is the time for Nigerians to look out for credible men and women who will be dedicated to finding a permanent solution to Nigeria’s perennial social and economic problems.

Nigerians need a government that will get Boko Haram insurgents to table their demand with the National Assembly, the legitimate political representatives of the people of Nigeria.

What does Boko Haram want from Nigeria?
Whatever it is – a new nation that is subject to Sharia laws; independence for the northern states; money and fame, whatever it is – the new government should be able to convince them to table their grievances through the National Assembly which will debate and deal summarily with them.

The new leader Nigerians desire must be able to penetrate through Boko Haram formations (including their foreign sponsors) and get them to make their grievances public so that the country’s legislators can look into them dispassionately and find a permanent solution to them.

Nigerians need a government that is willing and able to settle the problem of cattle grazing in states that have enough land for the policy, in consonance with land owners who will be paid adequate compensations for their land.

Nigerians need a government that will see the need to return the country to something close to the four regions Nigeria had at independence.

Today, there are six zones in the country, carved out for administrative purposes from the four regions the country had soon after independence.

The new government should create conditions to enable each of the 6 zones harness its own resources, manage its own police force, customs and excise, schools and hospitals, roads and infrastructure and contribute a percentage of its annual budget to the federal government for the maintenance of the Immigration Department, the Armed Forces, Central Bank and similar federal establishments.

A situation where all power resides in Abuja no longer appeals to the average Nigerian. Nigerians need a government that is closer to the people who voted them into public office, not one that is remotely controlled from far away Abuja.

Nigerians need a government that will see the immediate need to put a halt to child labour throughout the length and breadth of the country.

Nigerian children do not deserve the shoddy treatment succeeding governments have continued to mete out to them over the years.

Child labour, which is also child abuse, is a crime that has been abrogated in many countries, even in Africa.

Nigerians need a government that will see everything wrong with child labour and is willing to implement its laws on it, to turn around the fortunes and the future of the Nigerian child.

Nigerians need a government that will see the need to enact laws that will make it a criminal offence for employers of labour not to pay workers in time, as they are paid in developed countries.

A situation where working class families are owed salary arrears running into months and they are made to feel favoured rather than acknowledge their legitimate rights when they are paid is clearly unacceptable to the people.

The new government Nigerians need should be able to see what damage owing arrears of salary is causing the country. It is the major reason there is high level corruption and indiscipline in the country.

Nigerians need a government that will put laws in place which will make it compulsory for every Nigerian child born from the day the law is ratified to learn to speak the three major languages – Hausa, Igbo and Yoruba –from primary school level.

In about two generations, every Nigerian child would be speaking the three main languages in the country and would have evolved a status which would speak less for ethnicity and more for a national spirit of unity and progress.

Nigerians need a government that will make it possible for every village, town and city in the country to be connected with electricity and water contracted completely to private entrepreneurs.

A situation where government indirectly controls electricity supply, thereby making it impossible for citizens to sue and claim damages from defaulting electricity providers is clearly unacceptable.

With adequate electricity supply, many small and medium scale businesses will be activated. They will thrive and create more jobs for the country’s teeming population of school leavers in need of jobs.

Nigerians need a government that will drastically cut down on the remuneration of public office holders so that it becomes unattractive to rogue politicians and their rogue business accomplices.

The country has so far remained unable to get the most qualified citizens to manage its affairs because the law makers tied up so much money into their offices that for most Nigerians who have the guts to do or die, public offices have become gold mines.

If these offices no longer attract much money, rogue politicians will evaporate like tiny air and the best and most dedicated representatives of the people will emerge. Nigeria’s bold march towards true democracy will be better enhanced for it.

Nigerians need a government that will see the need to install cameras on all Nigerian roads and in strategic places in the cities to forestall criminal activities.

What remains?
Have Nigerian young adults now arisen from across their states and in one voice decided the aspirant they will support? Are they determined to dislodge the strong-hold of seat-tight politicians who have insisted on a recycling form of government for all these six decades? This is their time. All Hausa youth organisations and all Igbo youth organisations and all Yoruba youth organisations must stand together in this. They must sink their tribal differences now, come together, reason together and take their destiny and that of their children in their hands.

The plan is on ground. Stand to be counted with the presidential aspirant of your choice now that there is time. Vote for the individual, not for the party. Through a well chosen President and his team, Nigeria can still be reclaimed in 2019 from those political hawks who have made country their private garden. The country can be made great again and made to take its rightful place in Africa and the comity of nations. Justice and equity can still be restored and Nigerians will all be happy again. Stand up and be counted. The presidential election in 2019 is going to determine whether or not Nigerians actually know what is good for them. It is going to be a battle of the mind.

An Analysis Of The Matrimonial Causes Act (mca), As A Good Divorce Law In Nigeria

91 thoughts on “A battle of the mind”