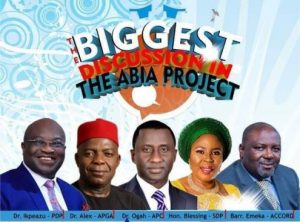 Gunshots, teargas forced people to scamper for safety at the end of the Abia State Governorship Debate held on Tuesday at the Famous Abia Hotel located on Finbarrs road, Umuahia. Four persons were wounded and property worth hundreds of thousands of naira were destroyed,

The students who took to violence, destroying chairs, doors and windows at the conference hall where the debate was held, blasted the governor of the state, Dr. Okezie Ikpeazu, for neglecting and refusing to address them (the Abia students).

According to a student who was at the scene but preferred to remain unnamed, the students under the aegis of National Association of Abia state Students (NAAS), came to witness the debate, after which they expected the governor to address and give them money for transportation>

They were not happy when their expectation was not fulfilled.

According to the source, pandemonium engulfed the venue as the debate was rounded off with Ikpeazu hurrying to leave the venue to catch up with the South East Zonal Rally of the PDP at Owerri.

He added that in their bid to get the governor's attention, his security men pounced on the Abia state president of NAAS, Nwazuo Remijius and others, leaving them injured.

Witnesses added that security details of the governor warded off the students, who, angered by the action of the security aides, barricaded the gate of the hotel in their bid to get the governor to address them.

It was gathered that the security aides started shooting and firing teargas into the air to scare the students away, thereby plunging the environment into confusion.

According to sources, four persons were injured during the melee while the students who felt neglected by the governor, vented their spleen on the property of the hotel, destroying chairs, doors and windows at the conference Hall where the debate was held.

The debate was organised by Online Media Practitioners Association of Nigeria (OMPAN), in conjunction with some radio stations which broadcast the event live, for some select governorship candidates.

A Senior Special Assistant to the governor on Grassroot Mobilization and Political Matters, Hon. Ugwumba Adiele, said the students acted very fast, stating that the governor had already mapped out money for them while he was rushing to Owerri for the South East PDP Presidential rally.

He condemned the attack on the governor, maintaining that giving of money should not be under compulsion but freewill.