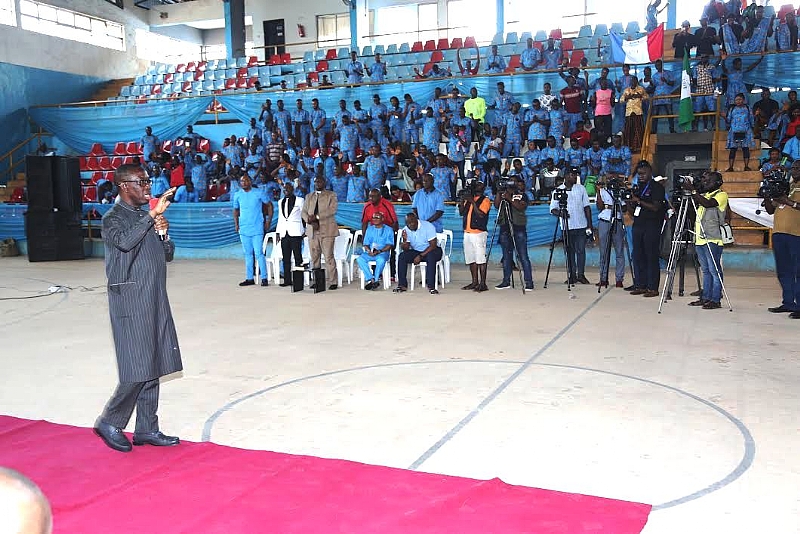 Barely 14 days after the Delta State governor, Ifeanyi Okowa, redeemed his pledge of $25, 000 dollars per goal scored by the Super Eagles in their African Cup of Nations (AFCON) qualifying match against the Bafana Bafana football club of South Africa, the state governor has promised Team Delta the sum of N1 million for every gold won at the National Sports Festival commencing Thursday, 6th December in Abuja.

The governor made the promise yesterday at the Stephen Keshi Stadium while addressing the state contingent shortly before their departure for Abuja, host to the sports meet.

According to the governor, “you have worked very hard in the last three weeks, it is time to harvest the medals; you are Team Delta, remember that there is no team that will be like Team Delta and I believe your coaches have been doing very well; for every gold, you will get N1 Million, so, if you are not prepared for gold, work harder to get gold; for every Silver medalist N500, 000 while every Bronze medalist will get N250, 000”.

Earlier, Chairman of Delta State Sports Commission, Mr Tonobok Okowa who presented the team to the governor, said: “the National Sports Festival which has not been hosted for a long time will take place in Abuja from December 6th, we invited you (Governor Okowa) to talk to us as we depart for the championship; the trophy you are seeing here is what we are going to contest for.

“We are the defending champion and by the grace of God, we will bring it back, we are prepared, the team have been in camp for the past three weeks, we have world champions among us and we are going to Abuja 2018 not only as champions but, to come back as champions”.

Chaplain of Government House Chapel, Ven. Charles Osemenem in a brief sermon, urged the team to rely on God and give Him the glory always.

10 thoughts on “ABUJA 2018: Okowa Promises To Give Team Delta N1 Million Per Gold”