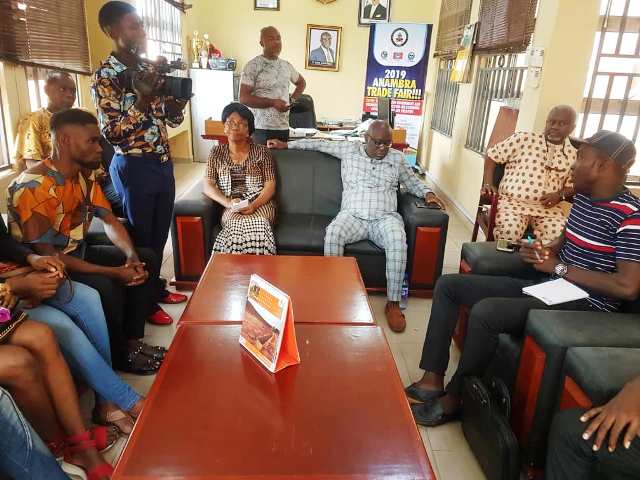 It was indeed a moment of eventful deliberations yesterday as young writers in Anambra State, under the umbrella of Society of Young Nigerian Writers (Anambra State Chapter) visited the state’s Commissioner for Information and Public Enlightenment, Hon. C-Don Adinuba in preparation for this year’s (fourth) edition of the association’s annual literary event, known as the Chinua Achebe Literary Festival.

Unveiling the purpose of the visit, the visit, the leader of the group and Coordinator of the Society of Young Nigerian Writers (Anambra Chapter), Izunna Okafor who described the association as the umbrella that unites young writers in the country, said that Chinua Achebe Literary Festival is their annual flagship program which they host in honour and memory of Nigerian literary legend late Prof. Chinua Achebe.

He lamented the that fact that Achebe who died since 2013 has not been immortalized or given any befitting honour even since years after his demise, he said through the event and the Poetry/Essay Anthology they publish yearly in memory of the legend, they celebrate him and immortalize him with words.

In his word, “through this program, we tend to remember, honour and celebrate the great literary crackerjack — Achebe (who made us proud, died since March 21st March 2013, and seems to have been forgotten with no single monument in his name); annually produce and publish potry/essay anthology in memory of Late Prof. Chinua Achebe, through calling for and securing of quality poems/essays from writers across the world.

“Through this, we also promote, encourage and reward creative writing and reading culture among our youths and students; use Achebe’s life and personality as ideal, to raise new amazing writers of our own present time; discover and harness the hidden amazing talents among our young ones, in the creative field; and also present writers and readers (intellectuals) as the elixirs to the country’s ailments, and so on”

Okafor further disclosed that this year’s edition of the event, with the theme “Intellectuals And National Development: The Achebe Approach” will take place (as usual) on Achebe’s date of birth, 16th November, 2019 at the Anambra State Central E-Library Awka, Anambra State, and will feature lectures in memory of Achebe, dramatization of Achebe’s selected books, Open Microphone/Spoken Word Poetry, quiz competition based on Achebe’s works and life, announcement of winners of Chinua Achebe Essay Writing Competition (for secondary school students in the state), unveiling and launching of Chinua Achebe Poetry/Essay Anthology entitled “Arrows of Words” (which is our newest collection of poems and essays in honour of Achebe), entertainment and other literary packages slated for the day.

Highlighting some of the challenges the association encounters in the course of hosting the program, Izunna Okafor who himself is an award-winning author called for support and sponsorship from both government and private individuals/organizations to enable them successfully host the event of the event, even as he pleaded to Governor Willie Obiano to appoint a literay aide (suggestively from the association) who will stand as bridge between the government and writers in the state. He further requested that writer’s residenc be built in the state in honour of Achebe.

Responding, the Commissioner, Hon. Adinuba appreciated the youngsters for identifying with the unpopular cause of celebrating Achebe, who he described as young described as one of the greatest brands in the state, country and Africa, noting that his birthday coincided with that of Late Azikiwe.

He revealed that the state government is planning great immortalization fo referred to as most cited author, even as he assured the young writers of government’s unalloyed support as they host the 2019 Chinua Achebe literary festival.

He said “Achebe was a prophet, seer and prognosticator, whose novel, ‘Man of the people’ predicted the January 1966 coup and its counter coup, six months after. We are happy that Achebe wrote his greatest novel `Things Fall Apart’ at 28. Things Fall Apart was the first intellectual book in Africa.

“Other publications before, then in the form of the popular Onitsha Market Literature (chap books) did not have the ‘Things Fall Apart’ subtlety.

He added:
“Achebe is one of the best brands that the country has ever produced and we are proud of his memory; he is one of the most cited authors in Africa today.

“His pamphlet, ‘The Trouble with Nigeria’ is also cited by most people. He was indeed a a great brand, and also a personal friend to me; and as such, I will be in the forefront to honour him as a personal friend.”

In a vote of thanks, the Secretary General of the association, Miss Maureen Kenneth, thanked the Commissioner for his warmth reception and solidarity with them, and called for more government involvement in the great event.

CONTINUED REJECTION OF BISHOP OKPALAEKE IS NOT TRIBAL, ITS THE LAW- ON IT AHIARA STANDS: