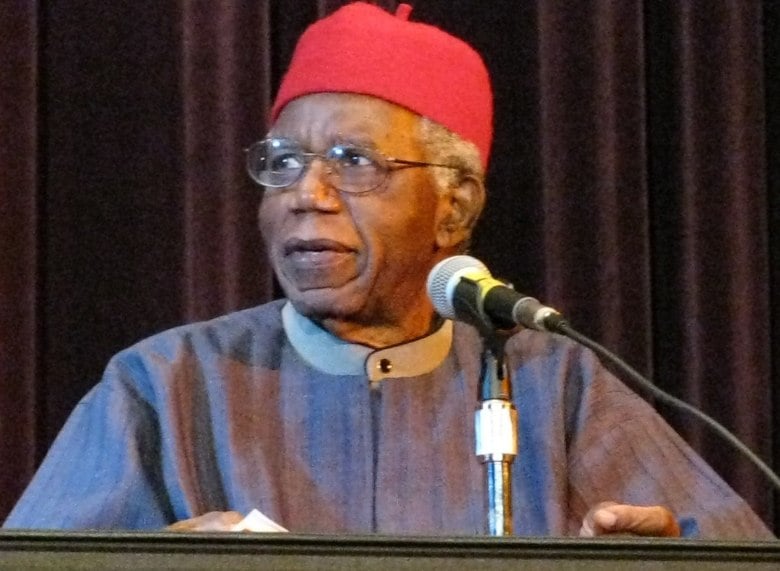 In Nigeria, there are many problems afflicting the nation. Such problems include ubiquitous grinding poverty, insecurity, abuse of tribalism, abuse of religion, corruption, poor political leadership, weak institutions, indiscipline, cultism, sabotage by foreign organizations and individuals, very lazy academics, soft indecent social media content, dysfunctional infrastructure, compromised media, ideologically dead political parties, dead or dying cultures and values, life-exterminating environment, unnecessary hype for gender unlimited freedom and human rights and so on. After interrogating these troubles, late Professor Chinua Achebe in his small, simple, succinct and powerful book: The Trouble with Nigeria (1983) came to theconclusion that Nigeria’s worst enemy is poor political leadership. But former President Olusegun Obasanjo, General TY Danjuma (rtd) and Dan Agbese are of the view that corruption is the trouble. The duty of this article is to present the debate and explore the policy implications for Nigeria.

According to Achebe, “The trouble with Nigeria is simply and squarely a failure of leadership”. Leadership here refers to former Nigerian heads of state and deputies, ministers, National Assembly members, governors and deputies, state assembly members, local government chairmen and councilors and judicial officers at all levels of government.

There are two key responsibilities that place the affairs and wellbeing of Nigeria squarely on the shoulders of political leadership: they must protect and implement the constitution of the Federal Republic of Nigeria; they must formulate policies for the well being of Nigeria. In fact they are directly and indirectly responsible for the management of Nigeria’s national interests. Therefore political leadership has the highest responsibility over and above every other one in Nigeria. They have overriding influence and authority in directing all affairs of Nigeria. Consequently, the entire Nigerian life depends or rests on their success or failure as administrators or managers of the ship of state.

What we have been witnessing so far in Nigeria is a failure of political leadership. This failure manifested in the Western crisis in the First Republic that led to the imprisonment of late Chief Obafemi Awolowo and operation weti. On 15th January, 1966, the military coup of late Major Chukwuma Kaduna Nzeogwu accused the political leadership of been “10 per centers”, that is, corruption. It manifested in the too many killings of Nigerians in riots or military coups with tribal undertones. All these culminated in the sacking of the First Republic, creation of states, the civil war and the growth of export of natural resources of a major means of financing Federal Budget, thus abandoning Agriculture which used to be the main stay of the Nigerian economy.

Poor political leadership led to building of social, political and economic structures that are merely ego serving and non-economically productive nor technically manageable by Nigerians. Not too long late Prof Claude Ake (1981) described Nigerian economy as disarticulated because there was no relationship between the oil sector and the manufacturing sector. In Political Science, when a county depends mainly on income from natural resources, in due time such resource becomes a “curse” because the “Dutch Disease” would have set in where most of the country’s labour would have been directed at the natural resource sector thereby neglecting the rest sectors, productivity falls, unemployment sets in and grows faster, inflation rises steadily, high national debt stock, while petro-dollars would be lubricating other non-productive luxury goods. Corruption grows faster in a mono-natural resource-based economy. For example it has been alleged that through corruption, Nigeria lost $1 billion revenue during the 1976-79 military government, $12 billion oil windfall in 1991, $16 billion electric power fund for power improvement between the 1999-2007.

Poor political leadership has led to incessant fuel scarcity (despite the presence of four refineries that gulp millions of dollars for turn-around maintenance) and the collapse of industries. Policy abandonment after spending huge amount of petro-Naira is another manifestation of porr political leadership. Where are the structural adjustment programme (SAP) gains, DFFRI, MAMSER and the party secretariats built for SDP and NRC in all the local governments in Nigeria? Where are the NEEDS and SEEDS programmes, the Seven-Point Agenda and the Transformation Agenda? All these programmes have consumed trillions of the Naira without even a single programme evaluation or review before abandonment. Even the current ERGP is taking place amidst the new fraud called budget padding: where the national legislature ( the NASS) would inflate the national budget and the difference belongs to them. It has just taken place this week (the 2018 budget has been increased by N500 billion by the NASS: The Guardian, 16th May, 2018, page 2). This means each member of the NASS would have a minimum of N1 billion. Insanity!

Meanwhile, Nigeria’s public educational sector is dead and taken over by the private school owners. Health sector is also dead as health workers’ unceasing strikes, fake drugs, dead NHIS and other forms of dysfunctionality have killed the sector. Infrastructure, from roads to rails and airports, functionality is just by the grace of God. Insecurity and killings have become normal occurrences in Nigeria where life is now valueless. Grinding poverty can be easily seen in the faces of Nigerians and the ever increasing crowd of beggars and thieves. Character and behavior are all about survival, so greed has taken over the minds and thoughts of Nigerians. Life is all about food, house, car, bohehole for water, generator for electricity, school fees, clothing and sex. Many workers in Nigeria beg for money to survive: in the offices, through social media, as co-tenants, on the roads, at the filling station, airports, banks, supermarkets, motor mechanic workshops, laundries, schools and even in the churches and mosques, it is begging all the way. When a critical mass of the people begin to chase survival through begging, prostitution, cultism, stealing, kidnapping, then indiscipline is on the throne and the society is in deeper trouble.

Obasanjo, Danjuma and Agbese disagree. Agbese in his column in The Guardian of 11th May, 2018 page 9, made reference to an interview with former President Olusegun Obasanjo by a team from the defunct Newswatch magazine, where Obasanjo insisted that “our number one problem was corruption because…if we fail to rid the country of corruption, nothing would go right”. In the same vein, General T. Y. Danjuma (rtd) argued that “the greatest challenge facing the country was corruption”(The Guradian, 1st March, 2018, page 57). To support Obasanjo and Danjuma is one of Nigeria’s erudite journalist, Dan Agbese, who was among the quartet that formed Nigeria’s foremost news magazine, Newswatch, and who also superintended over its failure. He in the same article referred to above, formulated a hypothesis that: “wherever public institutions fail the people, there you find the ubiquitous ‘C’ word”. I believe ‘C’ represents corruption. Consequently, to him, corruption is the bane of Nigeria.

My problem with the proponents of corruption is that ordinarily corruption as a normative idea can remain so without any problem and no harm to Nigeria, unless someone decides to activate the red-button of corruption. It is those human beings that are the problem and not the idea. A good example here is the above decision by the NASS of Nigeria to pad the 2018 budget by N500 billion thereby give themselves N1 billion each. If the NASS had resisted the idea, it will not cause any problem. But agreeing to have the idea, recommend and implement it is bringing corruption into life and this can affect Nigeria negatively. So it is the human beings who animate corruption that are the trouble. These human beings in this case are the political leaders.

The policy implication of insisting that corruption (not who perpetuates it) is the problem is that we make laws to fight corruption and not to fight those who indulge in corrupt practices. That is why when we now find the people, we fret and fail to deal with them. Therefore the law should target the corrupt individuals, so that when they are known later, we will not be afraid in dealing with them. Secondly, the penalties for individuals who are found guilty of corruption should be graduated from top to bottom. Thirdly, focusing on corruption makes us forget that corruption is a child of indiscipline and should be fought bottom-top. The fight should have programmes to deal with indiscipline from the family to the Presidency. The Economic and Financial Crimes Commission (EFCC) law must incorporate the National Orientation Agency (NOA) in its provisions so that a strong campaign against indiscipline and corruption should start from the families, schools, churches and mosques, all arms and levels of government and so on.

At the end, Achebe has won the debate because whatever problem that exists on earth today can be traced to the activities of human beings to whom God handed over the earth. Political leadership that is given all the powers and resources to solve the problems of society cannot be excused if it refuses to decisively deal with corruption. We cannot continue to hold corruption liable, rather it is those who perpetuate it that should be held responsible. Obasanjo and Danjuma lost this debate because they tried to shield and protect political leadership from the blame since they were part of it. Agbese can be excused because he was never in that group. But theoretically, Achebe won him because political leadership is a more important factor in the development of society than corruption. For example, there is corruption in the advanced world, yet they make progress. Reason: good political leadership.

Therefore it has become absolutely necessary and sufficiently urgent that in the 21st Century, Nigerians should begin to interrogate the quality and character of who leads them.

That whistleblowers bill of 1999

How prepared are 2017 Hajj air carriers?