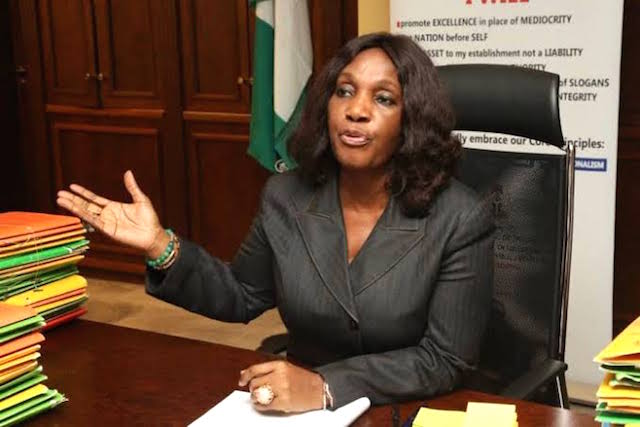 My integrity means more to me than any fame or money. When I say something, I want people to take it to the bank that I mean it and I believe in it. –Tim Tebow

In a sane society, the Acting Managing Director of the Niger Delta Development Commission (NDDC), Mrs Joi Nunieh should be facing interrogators for bringing shame to herself, deceiving the nation and earning fat pay for the few days she was in charge of the juicy agency. But this is Nigeria where might is right and criminals allowed to flourish and even given protection by our security agencies.

No one really knows much about the lady in charge of NDDC. Despite her years on earth and around the corridors of power right from former President Goodluck Jonathan’s days, no one has a biography of her. Her educational background is like a secret cult, just as her work history is shrouded in secrecy. We need not talk about her alleged marriage to three men as that will be passing through the camel’s eyes. The only thing known about her is that her father was a Senator and indeed, the dad was a man of integrity. How he ended up fathering a lady who lacks what he cherishes most should be a debate for her family.

For weeks, she has been accused of not possessing NYSC certificate. She has not only been accused but dared by the accusers to produce one if she truly has. There is no denying the fact that she is a lawyer, which in my view is still subject to contest. In Ogoniland where she hails from, her only claim to fame is being among the lawyers who defended Ken Saro-Wiwa, though a baby lawyer then. It was not a case they won and thus she could not have been celebrated as one of those who stopped the evil Gen. Sani Abacha from killing the hero of Ogoni.

The era of telling accusers to prove their case seem to be over. I refuse to agree with my senior respected colleague; Ibanga Isine who is her Special Adviser on Communication that her accusers should bring forth proof to show that she does not possess a valid NYSC certificate. No, she is a public office holder and owes us explanation on what happened that she could not serve her fatherland in her youthful age. For someone that schooled in Nigeria and graduated before the age of 30, it is mandatory that she passed through the one year of National Service. She has an explanation to give to her accusers, President Buhari who employed her via the surrogate called Godswill Akpabio and indeed all Nigerians who pay her through their tax.

If the number six man in the country, Senator Ovie Omo-Agege could be dragged before the public, which prompted him to bring a superior court judgment all the way from California, there is no reason under the earth that Joi Nunieh who schooled in Nigeria cannot tell us what happened to her NYSC certificate. Did she serve and it got lost in transit? We need to know. Did she serve and she was expelled before the end of service year? We need to know. And if indeed she served but cannot find her discharge certificate, we will sympathize with her. However, she must have taken pictures during her camping days as well as written down her name inside the NYSC book of life. As a type, I can’t find my own certificate but I’m not bothered because I have more than enough proofs that I served in Maiduguri.

We must stop the practice of encouraging national truants like Joi Nunieh to get away with misbehavior simply because they control public funds to throw around. The honorable thing for her to do is take the Kemi Adeosun’s route – RESIGN and apologize to the country for taking us for a ride. If she fails to resign, the President should immediately fire her and get a replacement before handing her over to the security agencies forfurther probe. There are over one million qualified Niger Deltans without scandal to head the IMC, before the new board is constituted.

Nothing about her has really been fantastic right from the days of old. Perhaps, she should tell us what happened at Hydrocarbon Pollution Restoration Project (HYPREP), a multi billion agency where she was also made the Acting Coordinator. Her stay there was filled with corrupt practices, illegal award of contracts, high-handedness, favoritism and even insubordination, so much that she began to fight her godfather, Ambassador Abdulkadir Musa, who was then the Permanent Secretary of the Ministry of Petroleum, just as she’s fighting her surrogate father now, Godswill Akpabio. The messy details of her years in HYPREP will be opened in due course for Nigerians to know that NDDC is not safe with her.

The truth remains that Joi Nunieh is a crafty woman who has mastered the act of staying on top even when there are allegations against her. NDDC will not be the first place for her to exhibit such attitude but it can be the last place. Her plot to stylishly stay for over a year in the name of forensic audit is well known. It is all in a bid to rake in money from the commission. Or is she here to breaking the jinx of ‘Acting’ and scheme her way to be nominated as the substantial MD in the new board that is to come? She was acting coordinator in HYPREP and now an Acting head of an IMC. Is this a conspiracy theory about to play out in the Joi Nunieh movie script?

It is befuddling how Mr President was deceived to allow a lady with vested interest in NDDC to sit over the same agency where she’s a contractor. How can an offender be a judge in her own case?

She is known to have used her company Cyprus and Jenny Limited to secure contract worth N326.3 Million on 29th of November, 2016 for emergency repair of Beeri Internal roads in Khana LGA. This contract was not paid for in the last NDDC administration but as soon as she was made the IMC head, she paid herself, despite the company not having compliance paper. The CAC search of December 2019 still have her as a director of the company, which is against the public service rule that demands her resignation of any company which she is a director.

The interim board since inauguration operates without a budget which is also against the law, but she is Joi Nunieh, a goddess, who is above the law of the land.

Self styled as the Queen Esther of Ogoniland, the Acting MD should not be allowed to sit over this forensic audit, with such academic scandal dangling over her head. Her usual cry that those who are against the audit are sponsoring write-ups and protest is a stale tale told to idiots. Is it Senator Peter Nwaoboshi who sees me as his number one enemy for dragging him before the EFCC and exposing his corrupt practices through the media that she will finger as sponsoring this? She is not only a major beneficiary of the system she seeks to audit but lacks the complete academic process which ends with going for NYSC to supervise any audit companies.

The law is no respecter of person and this is what President Muhammadu Buhari must display by telling her to resign like Kemi Adeosun or sacking her. If the President could face the pressure from Nigerians to bring his affidavit when he lost his WAEC certificate, a Joi Nunieh should not stay more than month, keeping quiet and telling us to go to hell. Let bring NYSC affidavit if she has it and we will accept it after due diligence.

The board needs someone who has not tasted from the waters of corruption, bitten from the seed of compromise nor bath from the rivers of ethnicity. Sadly, she’s a victim of them all and like Jonah who will cause the ship to sink, she should be let go, go to where she practices her law trade and will not need her NYSC to work or her past crime in HYPREP comes haunting. Let her go President Buhari.

These little things matter…
Fejiro Oliver, an investigative journalist can be reached on +2348022050733 (SMS ONLY). He tweets with @fejirooliver86 and IG Handle @kingofqueendom

How African Parents Teach Girls To Be Gender Slaves!