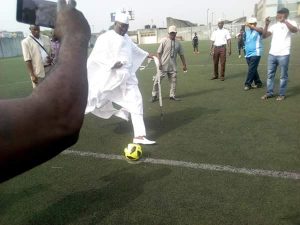 The Aare Ona Kakanfo of Yorubaland, Iba Gani Adams, has urged the Federal Government and multinational companies operating in the country to recommit themselves to the development of sports in the country.

He made the appeal on Thursday at the final of the Aare Gani Adams U13 football tourney at the Legacy Pitch of the National Stadium in Surulere, Lagos.

Aare Adams said it was a shame that the National Stadium was in such a bad shape, recalling his growing up days when he used to visit the edifice to play football and watch the country’s national teams practice and play.

Adams said it was saddening that even football, in which the country once excelled at the club level, had nosedived in performance.

He recollected the days when the likes of Leventis United FC of Ibadan, Julius Berger FC of Lagos, Spartans FC of Owerri, IICC of Ibadan and Enugu Rangers of Enugu held their own on the continent and made Nigeria proud.

He said: “I am calling on the Federal Government to put this edifice into full use once again.

“It is not befitting that all we do with our stadium now are social events and crusades.

“Whoever wants to do crusade and socials should use other facilities.

“We should use this place to breed future stars.
“Brazil has turned sports, especially football, into an economy on its own.

“We have the potentials.
“I am sure if the Federal Government makes a commitment and the multinational companies commit between 3 per cent and 5 per cent of their profit to sports development in the country, our economy will be the better for it.”

The tournament was won by Lagos Island-based Junior Arsenal.

Junior Arsenal pipped their Ultimate FC counterparts by a lone goal in the final match of the competition to commemorate the one year installation of Adams as the Aare Ona Kakanfo of Yorubaland.

Earlier in the day, Rivers FC of Ebute Metta thrashed Anibaba FC by three goals to nil to win the consolatory bronze medal.

Adams said of the performance of the teams: “I am glad to witness a soccer tournament of this magnitude.

“The kids have made me proud with their unlimited skills.

“I pray they will shine like the Messi, Ronaldo of this world.

“With what we have seen, I am sure next year event will be better than this.

“We shall produce a more conducive environment for the kids to showcase their talents.

“I will try my best and make sure this tournament is sustained.

“The kids are the future if this country and I also urge other philanthropists to show interest in the game of Sport.”

8 thoughts on “Adams appeals to FG, multinationals to sponsor sports as his U13 football tourney ends”