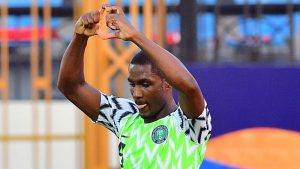 Thanks to his strike in the third place match, the Nigeria international moved ahead of four rivals to claim the prize for the first time

Odion Ighalo has won the 2019 Africa Cup of Nations Golden Boot, having scored five goals for Nigeria in the tournament.

Ighalo’s heroics helped the Super Eagles finish third in Egypt. He started with one goal in the group stage, which was against Burundi and followed it up with a brace against Cameroon, before scoring one each against Algeria and Tunisia.