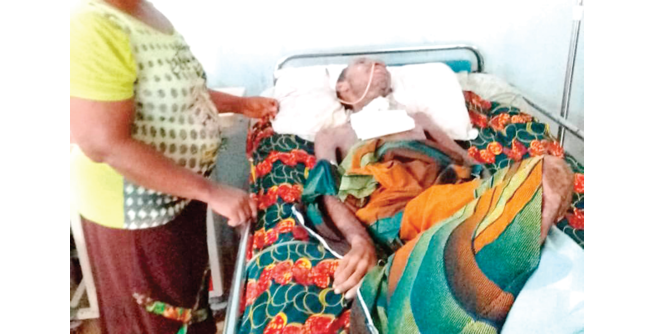 A father of five, Shedrack Ogbonna, who was plunged into coma after being knocked down by a police van driving against traffic in Yenagoa, Bayelsa State has finally died.

Ogbonna, a mobile phone repairer, died in the hospital after being abandoned by the Nigeria Police. He was knocked down by policemen driving against traffic on May 6, 2019, near Ekek Motor Park in the state.

He died at the Federal Medical Centre, Yenagoa on January 5, 2020 after being on life support machine for eight months. According to doctors, the impact of the accident damaged part of Ogbonna’s brains.

After the incident, the policemen in the van had quickly rushed him to the Emergency Unit of the FMC, where it was confirmed that he suffered severe brain damage. He was then later transferred to the Intensive Care Unit, where he was abandoned.

Doctors were said to have told the family that the victim needed about N5 million to have a chance to live a normal life again. The Bayelsa State Police Command had earlier promised to ask with the medical bills, but allegedly reneged after hearing that Ogbonna needed N5 million to be flown abroad for an operation that would make him live his normal life again.

His grieving wife, Felicia Ogbonna, said: “I have not seen this kind of thing before. It is only God that has been sustaining me and the children. We have left the hospital and we are somewhere at Ekeki.”

According to her, the Police withdrew their promise to support her family on the grounds that the policemen in the van that knocked her husband down were carrying out an assignment for the state government at the time and therefore should not be expected to pay the hospital bills.

6 thoughts on “After 8 Months In The Intensive Care Unit, Father Of 4 Hit By Police Vehicle Driving Against Traffic Dies”