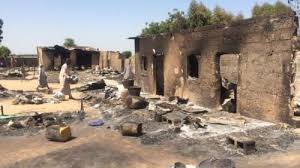 Korongilum, a community in Chibok local government area of Borno state, is currently being attacked by suspected Boko Haram insurgents.

A resident told The Nigerian Voice on phone Tuesday night that the attackers came into the community around 6pm, shooting sporadically and setting many houses on fire.

A military source said troops from the Nigerian Army’s 28 task force brigade and 117 battalion, both headquartered in Chibok, are already on their way to Korongilum.

Acordingg sources, the residents of korongilum have ran into nearby bushes for safety while their fate remains uncertain as the troops engage the invading fighters