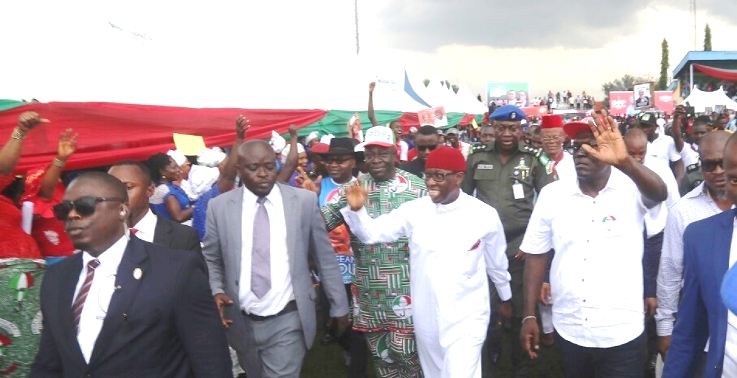 As the 2019 general elections gathers momentum, the realities of Osun and Ekiti states gubernatorial elections may have come on the Peoples’ Democratic Party (PDP) family as the fear of losing to the major opposition party, All Progressives Congress (APC), has taken the centre stage in Delta State.

The narrative was not different during the Ekiti state gubernatorial race as John Kayode Fayemi, of APC defeated Olusola Eleka, of PDP to return to the government house.

Governor Ifeanyi Okowa, who spoke in Agbor, Ika south local government area at a special prayer meeting organized by Bridge Builders in conjunction with the Lumen Christi Family Adoration Ministry, the governor urged his party, PDP, faithful to put their trust in God and pray for the success of the party in the forthcoming elections.

The governor, who was accompanied by his wife, Dame Edith, said PDP must build a solid foundation in Jesus Christ by frequently committing the election into the hands of God, stressing out that they must also trust in God with their hearts.

According to the governor who now banks on prayers in place of his achievements said the prevailing prayers of the men of God in Ika nation had healed the land, he assured Deltans of plans by his administration to build on the successes recorded in his first tenure.

Okowa who sees the 2019 governorship polls as a challenge, called on Deltans not to put their trust on man whenever they were faced with challenges of life, he said in the last three and a half years as governor of the state, he experienced peace because he continued to trust completely in God.

While assuring Deltans that every part of the state would witness the goodness of God in the New Year, Okowa told Christians to always pray for peace in the land and for those in positions of authority to enable them carry out the will of God in the nation.

Earlier in a sermon on the theme of the programme, ‘Safety in the hands of God’, Rev Father Mario Dibie called on the people of Ika nation to mobilize support for Okowa to enable him continue the development of the state as a worthy ambassador of the land.

Coordinator of Bridge Builders, Mr. Peter Idion, said the programme was organized to set the tune for the campaigns and subsequent victory of Governor Okowa at the election.

He harped on the need for Ika sons and daughters to support one of their own as he seeks re-election and assured that with God on their side, the PDP will emerge victorious in all the elections.

Special prayers were offered to God for the victory of Governor Okowa and the peace of the state.