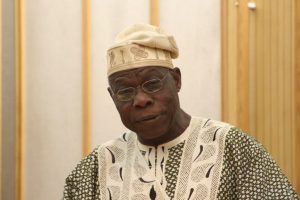 Former President Olusegun Obasanjo has again written to President Muhammadu Buhari, in which he warns that Nigeria tottering dangerously at a precipice.

“Nigeria is on the precipice and dangerously reaching a tipping point where it may no longer be possible to hold danger at bay”.

Obasanjo said.
According to him, it is incumbent on the the president to initiate actions to pull the country back from the dangerous cliff.

Obasanjo, who president of Nigeria between 1999 and 2007, said Nigeria has been consumed by violence and ethnic divisions since Mr Buhari assumed office four years ago, in a manner not seen for decades.

Obasanjo, in the letter is dated July 15, 2019, which was in the letter released by his media aide, Kehinde Akinyemi, said he resorted to an open letter intended to to address the weighty issues. .

Obasanjo said the world, especially Western countries, has been warning Nigeria against descending into a state of violence because any outbreak would be difficult to contain.

In the letter to Buhari, Obasanjo said, “I am constrained to write to you this open letter. I decided to make it an open letter because the issue is very weighty and must be greatly worrisome to all concerned Nigerians and that means all right-thinking Nigerians and those resident in Nigeria. ”

“The issue I am addressing here is very serious; it is the issue of life and death for all of us and for our dear country, Nigeria. This issue can no longer be ignored, treated with nonchalance, swept under the carpet or treated with cuddling gloves.

“The issue is hitting at the foundation of our existence as Nigerians and fast eroding the root of our Nigerian community. I am very much worried and afraid that we are on the precipice and dangerously reaching a tipping point where it may no longer be possible to hold danger at bay.

The former president revealed that he was worried about the state of insecurity in the country, having fought in the Nigerian civil war and also having a son, who is fighting Boko Haram.

He said, “When people are desperate and feel that they cannot have confidence in the ability of government to provide security for their lives and properties, they will take recourse to anything and everything that can guarantee their security individually and collectively.

“For over ten years, for four of which you have been the captain of the ship, Boko Haram has menacingly ravaged the land and in spite of government’s claim of victory over Boko Haram, the potency and the activities of Boko Haram, where they are active, remain undiminished, putting lie to government’s claim.”

The former pre
sident dismissed the reasons offered by Major Gen Tukur Buratai, who said victory over Boko Haram had not been achieved as a result of lack of commitment and motivation on the part of troops.

He said, “The recent explanation of the Chief of Army Staff for non-victory due to lack of commitment and lack of motivation on the part of troops bordering on sabotage speaks for itself. Say what you will, Boko Haram is still a daily issue of insecurity for those who are victimised, killed, maimed, kidnapped, raped, sold into slavery and forced into marriage and for children forcibly recruited into carrying bombs on them to detonate among crowds of people to cause maximum destruction and damage.”

He warned that for Mr Buhari to be able to stop the “smouldering ethnic agitations”, he would have to stop fanning “the embers of hatred, disaffection and violence.”

Obasanjo also called on armed herdsmen to publicly state their grievances in order to form a national discussion around it, rather than waging a violent campaign across the country. The calls were also extended to any other ethnic group that have concerns about how the country is being run.

The last week’s killing of Funke Olakunrin, a 58-year-old daughter of Yoruba leader, Reuben Fasoranti, was amongst the most recent national security mishaps which Mr Obasanjo said could tip the country off a perilous edge.

In Open Letter, Linda Ikeji Reveals Many ‘Girls Without Money Or A Voice’ Have Been Raped By Theo Ukpaa