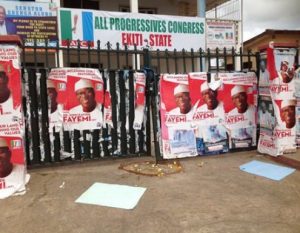 The battle for the All Progressives Congress’ governorship ticket in Ekit State has gone supernatural. Some unknown protesters on Monday sealed off the party’s secretariat in Ado Ekiti with juju (charms).

According to reports,  the aggrieved person(s)  had padlocked the gates of the secretariat, poured palm oil to form a circle and broke fresh eggs in and around the oily circle.

The protesters, who gathered at the gate, were demanding the immediate dissolution of the party’s state executive council, led by the chairman, Chief Olajide Awe.

Speaking on behalf of the protesters known as Ekiti APC Stakeholders, Mr Adeoyo Aribasoye, said they were relying on the constitution of the party, which he said permitted them to do away with the executive, adding that Mr Kayode Egunjobi had been appointed as chairman of the caretaker committee.

He said “the Ekiti APC executive has moved for a consensus candidate, which is against the constitution of our party.

“The executive has also openly displayed support for an aspirant. These actions are against the constitution and that is why we are passing a vote of no confidence on the Jide Awe-led executive. We want them to step aside and a caretaker committee to be inaugurated.”