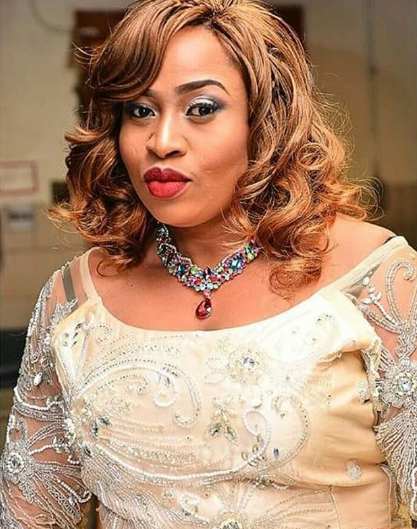 Nollywood actress, Aisha Abimbola is dead. The 46-year-old actress popularly called “Omoge campus” died last night, according to her colleague, actress Bisola Badmus. Reports from GoldmyneTV has it that she died of breast cancer last night in Canada.

Below is an excerpt from an interview she had with Lanre Odukoya about her journey to stardom, family life and other issues.

I would not really say I had wanted this from my childhood, but from a very young age, I knew I loved to act. Let me just put it this way: from my primary school days, I joined a theatre group, dancing troupe, cultural groups and all that. I did it even before I was an actress. I have done jobs as Master of Ceremony on many occasions which I equally started while in school.

I think I grew up being an entertainer because I was already a pain in the neck in my classroom. I made so much noise, disturbed the whole class, cracked one joke or the other, so some of my friends that I had in school were not actually surprised that I am in the industry.

You said you would have been a pastor, even with your Islamic background?

That is a testimony. My parents were Muslims and even before my dad died, I had been attending church. It was a bit painful at first but he would just not stop me. Then when you have some convictions within you, not that anybody has told you, nobody would stop you. And that was why I got into Christianity. It wasn’t what anybody told me to do; it was what I wanted to do. I wanted to do it a long time ago and I told my dad, so he was aware before his death.