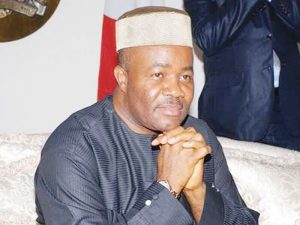 All things being equal, former Senate Minority Leader, Senator Godswill Akpabio, may leave the Peoples Democratic Party (PDP) this week and join the ruling All Progressives Congress (APC), a presidential aide has disclosed.

Special Assistant on Prosecution to President Muhammadu Buhari, Okoi Obono-Obla, posted on Facebook, Saturday night, a message saying Akpabio will be received into APC on Thursday by Acting President Yemi Osinbajo and other top leaders of the party at a rally in Ikot Ekpene, Akwa Ibom State. Obono-Obla also posted a photo of Akpabio with APC national leader, Bola Tinubu.

Akpabio, who has already taken some conscious steps as regards his anticipated defection, was said to have met with Buhari in London, where the president is currently spending a 10-day vacation. The former Akwa IIbom State governor had earlier met with Osinbajo in Abuja last week, in what is believed to be to a move to properly situate his defection plan.

But sources within the PDP, which appeared not to be disturbed by the development, dismissed Akpabio as one big mole it had to deal with over time, noting that he has divulged virtually all the party's plans and strategies to the opposition in an alleged attempt to secure protection from prosecution.

THISDAY gathered last night that the speculation about Akpabio's imminent exit from the PDP was beyond rumour, as he was said to have met with practically everyone that matters in the party.

Sources hinted that baring any last minute change, the defection ceremony had already been slated to hold this week, not later than mid-week at the Godswill Akpabio International Stadium in Uyo, the state capital.

Although sources hinted that the former governor of Akwa Ibom State had tried to leave the PDP with some senators from the state, everyone he approached was said to have rebuffed his advice, because according to them, the APC stood no chance in the state, let alone the region.

THISDAY gathered that the APC government had shown Akpabio a dossier on some of his alleged atrocities as governor, including monies said to have been stashed in different places, through the EFCC. Joining the ruling party was alleged to be a condition given to him to avoid prosecution for corruption. The former governor was said to have reluctantly accepted the condition.

However, disappointed PDP leaders, who spoke to THISDAY on condition of anonymity, said they had since known about Akpabio's predicament and encouraged him to fight on and not give in to the APC threat.

“But because his hands, too, are not clean, they were able to box him to a very bad corner,” the source said, adding, “His options, we believe, were limited. But he had done so much damage to us. He was our biggest mole. He held strategy meetings with us and went back to divulge all to the APC just to save face. We won't miss him; he can go.

“However, the one thing that his defection will prove to Nigeria is the hypocrisy of the ruling party. We will see their reaction and that of their supporters, who almost killed those who left the APC to join the PDP recently. We are waiting to see the fallout and this is, indeed, interesting.”

One of PDP sources said they started noticing Akpabio's double agent moves, when he started making a case for the reconvening of the National Assembly, as being pushed by the APC.

The source said Akpabio had already agreed to do a letter of the opposition agreeing to the reconvening, which is one of the requirements, before the PDP leaders told him they would deny him if he went ahead to write such a letter on behalf of the opposition, knowing full well it was not in the national interest.

But Akpabio, sources said, immediately travelled to see the president to personally seal his defection deal and secure assurances of non-prosecution from him. It added that he was not very satisfied with his meeting with Osinbajo, even though it was said to be productive.

He was said to have contended that personally meeting with the president was important to him before taking the option of defection to the APC, adding that such a meeting would help to sufficiently arm him to talk to others, who might be disposed to defecting with him.

It was as a result of this that some of the close aides of the president, including a top and prominent security person in the presidency, who is believed to be coordinating the current engagement with the National Assembly, facilitated the meeting between him and the president in London.

Although still in London, Akpabio is expected back in the country this week to perfect his defection arrangement and ceremony before the end of the week.

Meanwhile, THISDAY has gathered that Akwa Ibom State Governor Udom Emmanuel did not receive the news of the proposed defection of his godfather well but has resolved to move on regardless.

Sources noted that the relationship between the two leaders was not very cordial, as they have had to expose their differences over political and financial matters.

THISDAY learnt that other PDP governors in the South-south had also promised to rally round Emmanuel, saying they would not allow the federal government to intimidate him through Akpabio.

APC dissatisfied by the conduct of LG elections in Enugu

329 thoughts on “Akpabio set to quit PDP for APC this week, visits Buhari in London,”