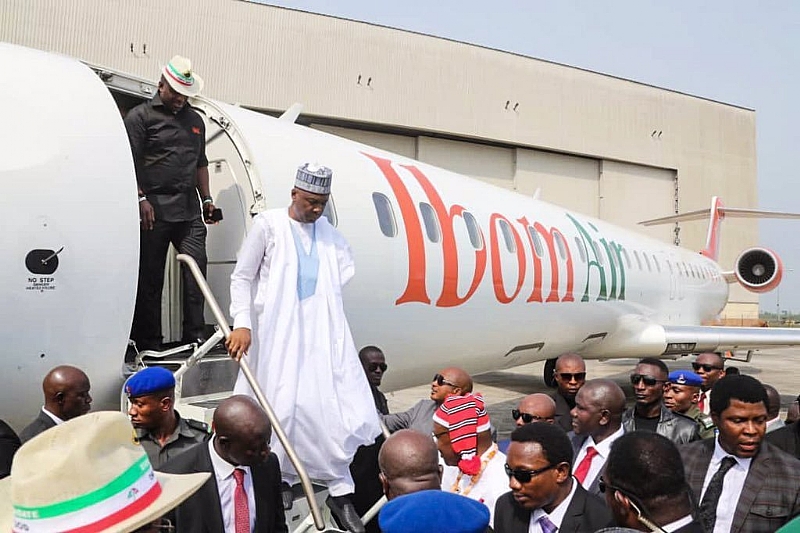 The airline’s Bombardier CRJ-900LR aircraft, which took off from the Obong Victor Attah International Airport in Uyo, landed at the Murtala Muhammed Airport 2, Lagos at 1.15 p.m.

It was welcomed with water canon salutation by officers of the Federal Airports Authority of Nigeria (FAAN) Fire Services.

Gov. Udom Emmanuel said that the airline was a project designed to enhance the economy and create employment opportunities for Nigerians.

The governor, who was represented by the deputy governor, Moses Ekpo, said the project was a testament to the vision of rapid industrialisation based on three gateways of land, sea and air into the state.

He, however, called on all Akwa Ibom indegenes to support the project regardless of their political affiliations.

“Finally, let me use this opportunity to appeal to some of our people in the opposition; it is not everything about us that should be coloured by, or be seen through the prism of politics.

“We should learn to separate development from politics. Ibom Air is a huge achievement for us all.

“When we board these aircraft to either Lagos or Abuja and back to Uyo, the cabin crew will not ask you whether you are a PDP or APC card-carrying member.

“Sponsoring articles in the newspapers aimed at dismissing the great works we have done such as this, or telling the world Ibom Air will never become a reality, is highly unfortunate and sad. We are better than this,” he said.

According to him the aircraft (Bombardier CRJ 900) would maintain regular daily flights to both Lagos and Abuja, urging Akwa Ibom residents to avail themselves of the opportunity.

Ibom Air was launched on Feb. 20 with three aircraft by the Akwa Ibom State government.