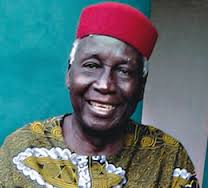 TRIBUTE & REMINISCENCES: Ikenga Nnewi left us barely six days after I had gone to welcome him in his son’s house in Abuja following his return from nearly two months political and visit to the US. We were together for almost two hours that day. It was 4th of December.

I briefed him on the rest of the trip to USA in which he and I were part of the ADF delegation, but he could not continue from Dallas. I also briefed him on the political situation in Nigeria as well as the International Press Conference in which the position of ADF was stated.

At the end, he congratulated ADF for the amount of vigor it had introduced to the struggle for Igbo emancipation. He assured me that he was going to summon the South-EastElders Consultative Forum to reinforce the position of ADF .

Of course, before discussing politics, he spoke to me about his health challenges. There was hardly any visible signs of his sickness. In fact, as soon as I came into the room, he stood up and we locked ourselves in a warm embrace like lovers who had missed each other for some time. Certainly, he gave me details of the extent to which his health had gone bad. He had asked me to feel around his tummy, the seat of his problem. I did, but I had no premonition that something odd could happen so soon. It is true he left me in no doubt about how serious it was, especially when he disclosed to me the cost and quantum of drugs he needed to keep going.

Then we ate sliced oranges together. I now regard that as our last super before his journey. He joked about how his daughter in-law had made such delicious soup for him andhe ate more than he should. We laughed with his daughter-in-law sanding by and smiling.

His wife later joined us and when she came in both of usembraced each other. She said she was in the US with himtaking care of him. A pretty caring wife-mother indeed she has been!

Fast foreword! Then, came the eve of December 11! Ikedife Jr called me and in that somber voice he said to me “Prof. we have lost your friend!”

“Oh my God! Oh My God!”, I yelled three times. Then there was utter silence in the memory of a man I have found to be a very rare species in our clime.

As the President of ADF, I interacted with him as our BoT Chairman at very crucial moments, especially when in any matter it came to the question – what is to be done?. In such a moment, both of would commune, deliberate and examine all possibilities. Our guide was usually the pages of history and our very rich collective experiences. At such moments between us it was like mind speaking to mind, a very deep spiritual communication.

After that, I would reach out and consult other ADF leaders. And we do have very many experienced statesmen and women, intellectuals (young and old) with very sharp mind.After passing through the mill of such intellectual distillation, certain matters may require final decision by an organ of ADF. Then the ADF Working Committee would swing to the implementation stage.

This was exactly how we approached the rising tide of the renewed Biafra agitation in February 2016. For me and for obvious reasons, the issue required prior consultation with Ikenga Nnewi. He had been in the thick and thin of the struggle for the restoration of Biafra. At that time Ikega Nnewi was being attacked and insulted relentlessly by the IPOB leadership.

The night Dozie Onyeanusi Ikedife and I discussed this matter before I summoned the ADF Elders Consultative Forum, he expressed disappointment with the unjustified manner in which Nnamdi Kanu was attacking him in the social media and the IPOB Radio Biafra controlled by him. He told me how he had played a role in the founding of Radio Biafra. However, he took my counsel on how we should proceed with handling the problem.

On February 2016, the ADF Elders Consultative Forum met in Enugu to deliberate on the raging global agitations for Self-Determination for Biafra, especially by the Youths under the aegis of the Movement for the Actualization of the Sovereign Sate of Biafra (MASSOB) and the Indigenous Peoples of Biafra (IPOB). Ikenga Nnewi was there. At the end of the deliberations, a Communiqué was issued. ADF stated that those non-violent agitations were legitimate political and social rights and, therefore, the Forum condemned the brutal manner in which the Federal Government under President Muhammadu Buhari was suppressing those democratic agitations.

Let me also recall that a delegation of the US Congressional Foreign Relations Committee had visited Nigeria and consulted ADF and Ohanaeze Ndigbo on the same rising tide of Biafra agitations about the same time.

The ADF Elders Forum mandated the Working Committee of ADF to send a delegation to visit Nnamdi Kanu and his colleagues at Kuje Prison. That happened to be the first such visit by any Igbo organization to those incarcerated and abandoned Igbo youth.

When eventually Nnamdi Kanu was given bail and came out of prison, he visited ADF at Enugu. We got him to embrace Dr Dozie Ikedife. We directed that he should visit Dr Ikedife in house at Nnewi and apologize to him. We were informed later that Nnamdi Kanu obeyed the ADF directive.

We all in ADF were humbled by the manner Dr Ikedife accepted this reconciliation despite all that had happened. Who does not know that Dr Ikedife, High Majesty Eze Ozobu, Ikedife’s predecessor as Ohanaeze President-General, Air Raid General Achuzie, Chief Debe Akpunwa Ojukwu, Bishop Enyioha, etc.were the backbones of the modern IPOB. The case they filed in the Federal High Court in Owerri, demanding the legal restoration of Biafra is still in Court.

To regard the modern upsurge for Self-Determination and the restoration of Biafra as the creation of the impatient Youth is not, therefore, correct. Ikedife and the other Igbo leaders who,by all standards, could be regarded as Statesmen are the inspirers of this movement raging throughout the world today.

oooooooooooooooooooooooooooooooooooooooo
Dozie Onyeanusi Ikedife did not get into the Igbo/Biafra struggle out of compulsion to make a name or out of careerist adventurism. No! He immersed himself in it as first nature, as if he was born for that purpose – the actualization of the freedom of Umuigbo and their neighbors trapped in an artificial Federation that has been for over a century like a slaughter house, a Golgotha for their citizens.

The historic event that brought Ikenga Nnewi and me together was the Igbo National celebration of the 50th Anniversary of Things Fall Apart in 2008. We tagged that event as First Festival on Igbo Civilization in honor of that Anniversarywhich was a global event. It was our own effort first to join the rest of the world to honor our brother, Chinua Achebe, the author of the epic novel. We also decided t use the occasion to reflect on our civilization, whose fate in the hands of European colonialism Chinua dramatized in Things Fall Apart and other works of his.

The letter which we jointly signed to bring Chinua Achebe to home, which happened to be Chinua’s last visit before his transition, was signed by Dr Ikedife, Monsignor Okere and myself.

It was from then that I discovered how much both of us shared in common. Since then we have worked together as people of like-minds. In entirely different circumstances we share the same title of Ikenga. This was before we met on the turf of Ohanaeze Ndigbo and later ADF where our life-long comradeship was born and nurtured.

An episode occurred one night. Dr Ikedife called me from Nnewi around 2.00 am. As soon as my phone rang, I picked it up. He said to me ‘Ndi Professor hana alarukwa ura’

Both of us burst into hilarious laughter. Humour, they say is a great therapy. Someone said it is one of the qualities any great man must cultivate.

Another Igbo leader with whom I often have the experience of late night calls is Amb. Austin Okwu, who resides in Connecticut USA. Amb. Okwu was the man who worked closely with Zik to get the five recognitions for Biafra during the war. De Okwu, as many of us address him, calls me at least twice or more every month to convey his encouragement, advice and prayers for the success of the Alaigbo Development Foundation (ADF). He has already called me as soon as he heard of Ikenga Nnewi’s transition. After conveying his condolences to the family, Ndigbo, ADF and he added “and your dear self for I know both of you worked very closely together”.

Our physical world has shrunk tremendously with the transition of Ikenga Nnewi to the spiritual realm. But as days roll by, we shall continue to pay tribute to his great memory. Ikenga Nnewi was a very rare species in our clime.

No matter what may be Ikenga Nnewi’s wish, tribute paid to the dead is for the edification of the living.