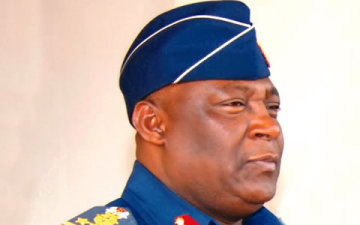 The Peoples Democratic Party, PDP, on Wednesday, reacted to the murder of a former Chief of Defence Staff, Alex Badeh.

Badeh was murdered by unknown gunmen on Tuesday along Abuja-Keffi road while returning from his farm.

However, PDP, while describing Badeh’s death “as a national loss,” stressed that the insensitivity of President Muhammadu Buhari’s administration could be attributed to the murder of the former CDS.

The party said the ambush and “killing of a military officer of ACM Badeh’s status has heightened fears and apprehensions, on the level of insecurity in the country, particularly, the safety of average citizens, under the incompetent and insensitive Buhari administration.

“We note that the murder of the former CDS, came ahead of his opening of defence, in January next year, in the N3.9 billion military fund case preferred against him by the APC-led Federal Government. “We, therefore, demands a wide-ranging investigation into the killing to unravel those behind the dastardly act as well as the motive behind their action.”

The party recalled that the “killing of former Chief of Army Administration, Major General Idris Alkali, in Plateau state as well as the horrific murder of over 100 of our gallant soldiers in Melete, Borno state, by insurgents” adding that “President Buhari has failed woefully as Commander-in-Chief of the Armed Forces.”

Insisting that “our nation is drifting and gradually assuming the status of a failed state, PDP urged President Buhari to “spend the few months left of his administration to provide a leadership that will secure respect for our territorial integrity and the lives of our people.”

“Our party notes further that the failure of President Buhari is whittling the confidence of the citizens in our nationhood.

“We describe ACM Badeh as a fine and patriotic officer, who made various sacrifices towards the security, unity and stability of the nation, particularly as the Chief of Defence Staff and that his killing is a monumental loss to the nation.

“We condole the Badeh family, the Government and people of Adamawa state and prays God to grant them the fortitude to bear the loss. We urge our security forces to immediately swing into action and leave no stones unturned until the killers are brought to book.”