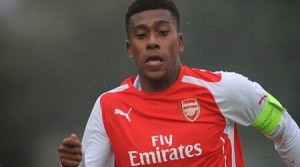 Alex Iwobi got his name on the scoresheet in Arsenal’s 4- 1 victory over Crystal Palace in Saturday’s English Premier League encounter.

The Gunners went on a 22-minute rampage in the first half, scoring all their four goals against the Eagles within that period.

Iwobi doubled the lead in the sixth minute when he fired in from close range after previously forcing a safe from goalkeeper Wayne Hennessey.

Laurent Koscielny increased the scoreline after benefiting from another shambolic Palace defending and Alexandre Lacazette notched the fourth goal following a fine combination with Mesut Ozil.

On return from the first-half break, Luka Milivojevic scored a consolation in the 77th minute.

Iwobi was replaced by Sead Kolasinac with eight minutes left to play while Egypt international Mohamed Elneny featured from start to finish.

Cote da��ivoire’s Wilfried Zaha and Mali’s forward Bakary Sako were on parade for the Eagles throughout the duration of the game but could not save Roy Hodgson’s side from the defeat.

Arsenal will next clash with Chelsea in Wednesday’s League Cup tie while Crystal Palace will travel to London Stadium to keep a date with West Ham United in their next top-flight duel on January 30.

City beat United 2-0, back on top of Premier League